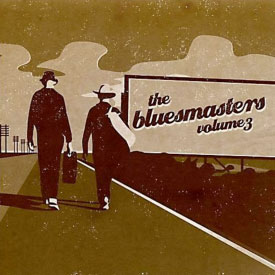 Under the enlightened guidance of blues guitar slinger, producer and session cat extraordinaire Tim Tucker, the Bluesmasters have evolved into a powerhouse band gaining momentum with each release. Initially a vehicle to feature former rock star singer Mickey Thomas as he proved to be a bona fide blues singer, the new release is a showcase for Tucker to strut his stuff, as well as for the devastating blues singer Hazel Miller. Tucker knows his blues from the inside out, having personally known both the late Pinetop Perkins and Hubert Sumlin, along with other legends of the genre, and his playing exudes the three “Ts” of great blues guitar: taste, tone and technique.

Breaking with the two previous Bluesmasters albums, Volume Three, a 10-song album, includes seven original songs written by Craig Ericson, as opposed to mostly classic covers. In addition, new bassist Kassidy Tucker, daughter of Tim and only 16 at the time of recording, brings to the recording an understanding of the primary importance of groove way beyond her years. “Rusty (Anderson) once told me to just do my own thing because that’s how he learned; so that’s what I did,” says Ms. Tucker. She is joined by the core group of Thomas and Miller (lead vocals), Larry Thompson (drums), Doug Lynn (harp) and Mitch Towne (Hammond B-3, piano), along with guest artists Ric Ulsky (B-3), Aynsley Dunbar (drums), Bob Birch (bass) and guitarists Hubert Sumlin, Rusty Anderson, Eric Gales and Jake E. Lee contributing additional rhythm parts.

“Loving Man” opens the stunning show with a pulsing minor key shuffle finding Miller roaring like a force of nature, blowing the doors off in the dramatic stop-time with “I wanna love you, let you know, don’t want to leave you, or let you go. Please believe me, you gotta understand, I want you to be my loving man” as Tucker matches her burning intensity with searing, propulsive lead lines. On “Can’t Let You Go,” an ominous, heavyweight slow blues, Miller makes an impassioned, utterly convincing plea to her lover of “I need you so bad, baby, and I just got to let you know, I got to keep you back, cause I just can’t let you go” followed by Tucker frying his speakers and bending his frets to his will with equal commitment. A rocking version of amplified harmonica pioneer Little Walter Jacobs’ “Up the Line” has the vocally barrel-chested Thomas continuing with his own uncompromising performance in conjunction with Lynn getting a chance to display a fitting tribute to the blues harp legend, sexy sax-like tone and all.

The stone Chicago instrumental shuffle “Colorado Boogie,” penned by Tucker and Lynn, channels the mid-fifties, Windy City Southside in an unstoppable foot-tapping romp pumped by the guitarist chomping like a demon, while again shining the spotlight on the consummate musical skills of Lynn. Miller returns to the microphone on “Suspicious,” a sensuous slow drag with a country blues hue and buoyed by the ethereal B-3 of Towne where the lead singer and lead guitarist engage in a seamless “call and response,” with each contributing their considerable share to the musical dialogue before Tucker soars skyward lyrically in a climactic solo. Miller exposes unbridled lust on “Good Time Woman,” a surging stomp driven hard by the rock solid rhythm section of Kassidy Tucker and Thompson as Lynn joins in a virtual duet with the singer as she boasts”…I said honey, now what’s your name, ever since I loved him, he’s never been the same…(I’m a) good time woman, need a good time man, yeah, I do…and if you ever love me, I think you’ll understand.” In an intelligent example of programming, a slower, slinky Jimmy Reed’s “Baby What You Want Me to Do” comes next with Thomas manfully asking the musical question, seemingly in response to Miller in the previous track, as Lynn once again proves his candidacy as the most underrated harmonicist on the current blues scene.

Miller stretches her commanding vocal chops into her upper range on the crackling mid-tempo shuffle “Come Back Baby” containing Tucker riffing along enthusiastically in sympathetic support. “Come back, baby, cause we can have a good time. Now I’m sittin’ all alone with your lovin’ on my mind. Why don’t you come back, baby, cause we can have a good time” rings out as the mantra of a proud, lusty woman who knows what she wants and needs. Logically, “One I Need” follows, an enticing, seductive slow blues with arousal ramped up to near uncontrollable levels by Tucker and his rampaging guitar while Miller lays bare her feelings with flaming passion that would “make a hare hug a hound”: “…and if you ever leave me, I would be in misery. And I ain’t too proud to tell you, you’re the one I need.”

Closing the set on an updraft is a surprising and brilliant cover choice with the 1978 Eddie Money pop hit “Baby Hold On” transformed into a muscular R&B number for Thomas to shine as he shows wise restraint in order to intensify the steamy quality of the lyric content, musical accompaniment and his wide-ranging, vaunted singing abilities. This last track is the final tune recorded by Elton John’s bassist Bob Birch, a life-long friend and collaborator with Dunbar and Tucker, and was added as a fitting tribute to a great player, who passed shortly after this recording. “The track is like a blues version of ‘Jane’ by Jefferson Starship,” said Birch. It is a staple of the band’s live set, which appears in “The Bluesmasters Live” that will be on the streets February 25, 2014.

Calling themselves the “Bluesmasters” is not hyperbole as Tucker, Miller and Thomas and their supremely qualified cohorts conclusively demonstrate. With unsurpassed dedication and knowledge of the blues they have produced a blockbuster record that cuts to the heart and soul of what constitutes the most rewarding experience the genre has to offer.