The Durango Blues Train Returns for Two Weekends In 2014 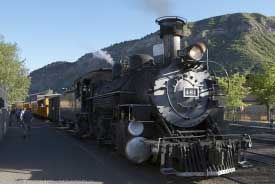 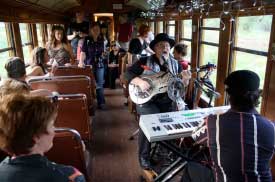 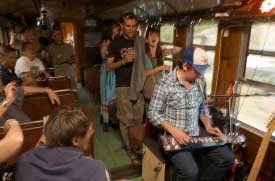 The Durango Blues Train expands to two unforgettable weekends in 2014, May 30 and 31st and August 22 and 23rd. Presented by the Telluride Blues & Brews Festival and SBG Productions, this unique live music event takes place aboard the Durango & Silverton Narrow Gauge Railroad in Durango, Colorado. Each night will feature a different lineup of six live blues artists, to passengers traveling aboard the historic coal-fired, steam-powered locomotive as it winds through the spectacular canyons of the Colorado San Juan National Forest.

The Durango Blues Train is proud to announce the lineup for the first weekend of the 2014 Blues Train, on May 30th and 31st. Award-winning musical guests include Big Sam’s Funky Nation, Todd & The Fox, Robby Overfield, Kipori Woods, The Bottoms Up Blues Gang, Eddie Turner, C.W. Ayon, Johnny Long, Chris Dracup, and Gino Matteo. The lineup for the August 22nd and 23rd Blues Train will be announced later this spring. Tickets for both 2014 Durango Blues Train events, May 30-31 and August 22-23, 2014 are on sale now.

The moment the Blues Train fires up and departs Durango’s historic train depot, passengers will know they are in for the experience of a lifetime. Each artist performs in a different vintage coach car, while passengers are free to sample the different musical acts by traveling from one rail car to next. Passengers experience breathtaking views of the San Juan National Forest including the “Highline,” a world famous section of railroad crawling along cliffs high above the Animas River. The Durango Blues Train is sure to be an unforgettable musical journey.

Guests can enjoy a beer and wine cash bar with light snacks while riding the train. Tickets are $95 per person, plus a 7% Historic Train Preservation fee. Tickets are extremely limited and purchasers must be 21 years old to participate.

For more information or to purchase tickets visit DurangoBluesTrain.com or call (866) 515-6166.