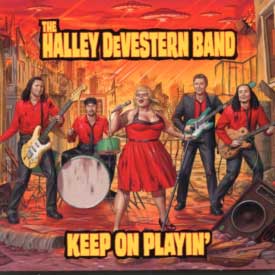 “Ready for a balls-to-the-wall blues-belting mama that has sung with Big Brother & the Holding Company and has the admiration of Bonnie Bramlett? This fearless, two fisted broad grabs the spotlight, owns it, growls one minute, purrs the next and carries on like there’s no tomorrow. A wild ride throughout, mama loves her job and isn’t afraid to let it show.  When she names her influences, it is no surprise to find singers Aretha Franklin, James Brown, Al Green or ’70’s soul acts The O’Jays, Ohio Players, and Earth Wind and Fire. Halley has slowly but surely been making her own mark in the greater New York City area and is now poised to break out internationally.

The band features a who’s who of New York’s finest musicians, seasoned ex-sidemen of artists as diverse as Roger Waters and Shawn Mullins, from a full range of musical styles. An undeniable fact is the strikingly muscular musical engine room of the band which is a wonderful combination of blues, funk, rock and Jazz; not just individually influenced or inflected numbers but, throughout all of the numbers there is an atmosphere of a tightly woven, pulsating, urban tapestry; floating harpsichord sounding guitars and keyboards that are underpinned with briskly impressive martial drum work.”

All the tunes on this EP are original, written by Halley DeVestern and Tom Heinig, except for the title track, “Keep On Playin’, ” which is written by all of the band. Halley was a Top-Ten Editor’s Pick at Rolling Stone.com, reaching #9 in the Rock and Pop Category and the Top 30 overall. Her previous album, “Fabbo Boffo Smasho” peaked at #1 on Roots Music Report and was on the ballot for the 57th Annual Grammy Awards. Film and TV features include CBS News, Dance Moms, One Life To Live, Ekko.

“[Halley’s] got the biggest pipes I’ve heard on a babe in a long time.” – Rock and Blues legend Bonnie Bramlett