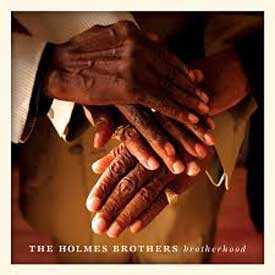 Featuring fourteen songs – including eight new Holmes Brothers originals and six carefully-chosen covers – Brotherhood finds The Holmes Brothers at the absolute top of their game, creating timeless roots music. The album is full of deeply soulful performances, from the rocking Wendell original “Stayed At The Party” to the sweet harmonies of Ted Hawkins’ “I Gave Up All I Had” to Sherman’s intense “Passing Through” to the doo wop splendor of Popsy’s vocals on the Stax classic “My Kind Of Girl.” The band closes Brotherhood with their most requested song – and a highlight of each and every live performance – the soul-stirring “Amazing Grace.” Brotherhood is a testament to the uplifting musical power that comes from the close-knit, fraternally telepathic relationship of The Holmes Brothers. The New York Times declares their music “deeply soulful, uplifting and timeless.”