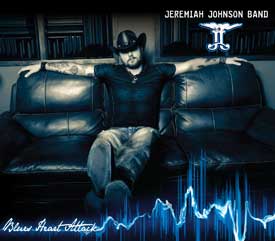 “I really wanted Blues Heart Attack to be a roller coaster of emotions that reflect the life, heart and soul of a blue-collar blues man,” Johnson says about the new disc. “With songs that I started writing over 10 years ago and others that were basically born in the recording studio, I truly feel this record closely represents my band past, present and future. With the addition of the sax, keys and harmonica I believe we have created memorable music people will feel in their soul and tap their feet.”

Jeremiah Johnson’s last album for Connor Ray Music, Grind, released in 2014 and produced by Devon Allman, included the song “Black Lingerie,” which was just recognized as the Best Blues Rock Song of the Year at the Independent Blues Music Awards show. Grind also featured Grammy Award-winner Yonrico Scott on drums from Royal Southern Brotherhood, and reached the #8 slot on the Billboard Blues Chart.

Born and raised in St. Louis, Jeremiah Johnson is the voice of Mississippi River blues blending with the struggles of everyday life. And yes, he IS named for the title character portrayed by Robert Redford in his landmark 1972 western film. Jeremiah began learning guitar at age 6, drawing inspiration from his rich St. Louis blues heritage and legendary guitarists like Alvin Lee, Eric Clapton and Hank Williams, Jr. With these influences, Johnson began building his musical foundation.

After relocating to Houston, Texas, in 1999, Johnson finished in first place for three consecutive years at the Houston Regional Blues Challenges, sponsored by the Houston Blues Society. During his 10 years there, Johnson merged a Texas style with St. Louis blues to create the unique sound he showcases today.

In 2011, Johnson was the proud winner of the St. Louis Blues Society International Blues Challenge and went on to the semifinals to represent the city in Memphis. One year later, Sirius XM’s Bluesville channel picked up the Jeremiah Johnson Band CD for major airplay, as did numerous radio stations across the country. With five previous albums under their collective belts, the Jeremiah Johnson Band continues to tour around the country turning fans onto their kickin’ blues/rock sound.

In 2014, Johnson shot his documentary concert film, Ride the Blues, directed by Australian producer/director Gary Glenn, at the historic Capitol Theater in downtown Burlington, Iowa. The film was a live music portrait of Johnson’s rise to prominence, featuring intimate interview segments, still photography, guitar solos and stunning vocals. Donations from concert attendees were given to the theater and to the St. Louis-based National Blues Museum, connecting Johnson’s roles of musician and music advocate.

The Jeremiah Johnson Band supported the release of Blues Heart Attack with several shows in the St. Louis area, as well as touring around the rest of the country during the summer and fall at a series of concert venues and music festivals.

Jeremiah is an endorsed artist for Delaney Guitars, designed by Mike Delaney, who makes custom electric guitars manufactured in Austin, Texas. He currently has four Delaney guitars and uses them at every show, because as Jeremiah says, “they are simply bad ass guitars!”