The Jimmy’s :: LIVE FROM TRANSYLVANIA 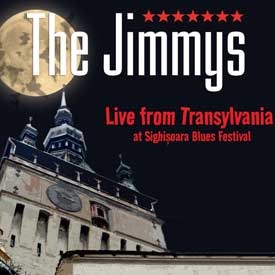 Live From Transylvania was recorded on March 28, 2015 at the Sighisoara Blues Festival in Romania. Six-time award winning keyboardist and vocalist, Jimmy Voegeli, leads Wisconsin’s blues powerhouse The Jimmys. The tight vocal harmonies and powerful horn lines by the Midwest’s best horn section will transport you back to Motown. Add to that the deep pocket by an all Brown Cow Productions’ star rhythm section and you have The Jimmys. The band was named one of the Top Ten festival acts of 2015. When he’s not performing, Voegeli helps out on the family’s fifth-generation old dairy farm.

Live From Transylvania is dedicated to the memory of Candye Kane.

“We were touched by Candye’s strength and sheer professionalism. She played right before us at Sighisoara Blues Festival while under extreme duress from the ravages of cancer and the treatments. It was her last show of a long European tour and she struggled to even make it up the stairs to the stage. Then put on on F**K of a show! She was so wonderful to us even though her pain was incredibly evident. Every time we think of that festival, we can’t help be remember Candye Kane and her contribution to blues and human spirit.” Jimmy Voegeli

Derrick Procell :: WHY I CHOOSE TO SING THE BLUES Nick Schnebelen Band "Around The World 2017 Tour”