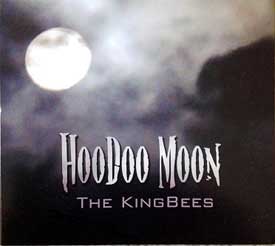 The KingBees second album, Hoodoo Moon, solidifies them as one of the midwest’s most creatively original blues bands. Showcasing 10 new original songs, HooDoo Moon proves the KingBees to be one of the region’s premier blues bands. This CD paints the whole canvas of the blues, evoking comparisons to such artists as Professor Longhair, Little Feat and The Allman Brothers. Eclectic and highly entertaining, HooDoo Moon shows the KingBees are a band to be reckoned with

The 10 new original songs run the gamut from Chicago to New Orleans blues, with some blues rock in the mix. As Greg Martin, guitar virtuoso from the Kentucky Headhunters blurbed on the Hoodoo Moon cover,” RIck, Jim, David, Mike and Rob wear their influences well. Louisville blues icons such as Sylvester Weaver and Steve Ferguson from NRBQ would be proud.”

Selby Minner & Blues On The Move :: WE NEED MONEY A Reunion Party Weekend 35 Years In The Making