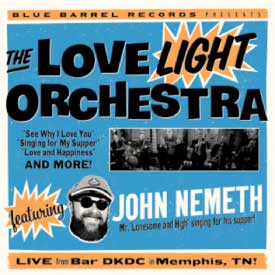 Fans of Pokey LaFarge, the California Honeydrops, the Dustbowl Revival, and Nathaniel Rateliff & The Night Sweats will delight in the debut album by The Love Light Orchestra, a group of the best Memphis has to offer. The self-titled debut album was recorded live in concert to a full house at Bar DKDC in their hometown by Matt Ross-Spang, who produced Margo Price’s breakout album Midwest Farmer’s Daughter and whose other credits include Jason Isbell, Brent Cobb, The Drive-By Truckers, and Corb Lund. It was released November 17 on Blue Barrel Records.

Two-time Blues Music Award winner John Nemeth fronts The Love Light Orchestra. Esquire said, “There aren’t many true soul men left in the world, but John Nemeth is one of ’em.” No Depression raved about his “magnificent voice.”

Bland and his longtime arranger Joe Scott are a chief inspiration behind the formation of the band, which seeks to distill the sounds of the ‘40s and ‘50s rhythm & blues and blues and was named for Bland’s 1961 hit “Turn On Your Love Light.” Saxophonist Art Edmaiston and drummer Earl Lowe also did stints touring with Bland. Additionally, The Love Light Orchestra draws from the horn-driven Memphis blues sound of B.B. King, Little Milton, and “Junior” Parker. The band brilliantly recasts Al Green’s iconic hit “Love and Happiness” as a shuffle, with parts inspired by Charles Mingus’ “Fables of Faubus.”

Nemeth says, “The Memphis sound of the ‘50s put in the sophistication with the horns, but it never lost that gritty aspect of the blues. And the spirituality in the vocals was tremendous—the melodies have such great movements, and the lyrical rhythms are perfect.”

Click on our Jukebox to hear “See Why I Love You”