The Mannish Boys :: WRAPPED UP AND READY 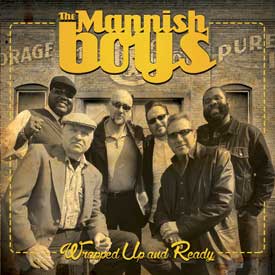 From the beginning of the band six CDS ago, Randy Chortkoff has worked like the ringmaster of a three-ring circus, keeping one of the tightest all-around blues bands in the world today busy in the center ring, while performing amazing feats of coordination around them by spotlighting countless guest stars on each and every release. As a result the Mannish Boys have featured some of the best and brightest names in blues today, from the most seasoned veterans to the most exciting young talent, all carefully mixed and matched to field teams of artists perfectly in synch with one another on each song they take on. It wasn’t at all unusual for past releases to feature three or four different singers, four or five different guitarists, and a full cast of all-star guest soloists.  But this time out, the plan was different: scale things down, simplify, strip everything down to just the fundamentals. However…as you know by now, they’ve never been known to do anything halfway, so that plan went out the window on day one.

The result is the latest Mannish Boys extravaganza, complete with an all-star guest lineup worthy of most full-blown blues festivals. And much like a perfect wedding, there’s something old, something new, something borrowed, and plenty of blue(s).  The core band is led by powerhouse vocalist and front man Sugar Ray Rayford, and features the double-barreled guitar firepower of Kirk “Eli” Fletcher and Franck Goldwasser, anchored by the skin-tight rhythm section of bassist Willie J. Campbell and drummer Jimi Bott. Chortkoff himself contributes harp and vocals as needed, and right there you’ve already got one of the best lineups in the business.  But of course, that’s only half the story.

Among those making guest appearances are the sultry singer Candy Kane (helped out by her amazing guitarist Laura Chavez), Bay Area great – by the way of New York and Chicago – Steve Freund, blazing young guitarist Monster Mike Welch, and piano master Fred Kaplan.  Blues harmonica fans will also find plenty to enjoy as three guests are also on hand to help hold down harp duties: Delta Groove recording artist Bob Corritore, teenage phenomenon Jacob “Walters” Huffman, and the great Kim Wilson of the Fabulous Thunderbirds. Also notable on this release is the return of guitarist Kid Ramos, one of the leading blues guitarists of his generation, who has been off the scene for the last couple of years dealing with serious health issues. And that’s not all, folks…also on hand are bass player Bill Stuve and drummer Dave Kida, both veterans of Rod Piazza’s Mighty Flyers, French Import Nico Duportal on guitar, a full array of background singers including promising newcomer Trenda Fox, and much more. So – no halfway measure here. But just what you’d expect from the Mannish Boys an exciting tour through the very best that blues has to offer in the 21st century.