The Mighty Orq :: LOVE IN A HURRICANE 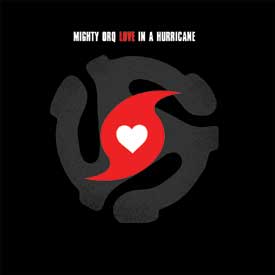 “I’m particularly excited about the new album because I’ve finally been able to combine all the elements of my various performance styles in one place,” Orq says about the new Love in a Hurricane. “There are rockers, singer-songwriter tunes, solo acoustic and cigar box songs, as well as southern rock, gospel and blues. It feels like the most complete portrait to date of all the musical styles I love to play.”

Always known as a stand-out guitarist and vocalist, over the last 13 years Orq has matured both as a writer and arranger. Where early-on the musical emphasis was on raucous drum and guitar lines, now Orq takes a more song-centered approach, letting songs dictate the instrumentation rather than the other way-around. On Love in a Hurricane, new compositions such as the title track, “Say It with Silence,” and the Weissenborn guitar instrumental that closes the album, “Cannon Ball,” showcase an experienced composer, instrumentalist, and singer beginning to reach his stride. Besides the10 original tunes, the new disc also includes exciting takes on Freddy King’s “Pack It Up,” courtesy of Orq’s funky, soulful blues shouting; and Son House’s “Death Letter Blues,” where Orq creates a brooding, atmospheric vibe that befits the content of the lyrics.
As a testament to his growth as a musician, The Mighty Orq recently made it to the finals in the 2016 International Blues Challenge (IBC) in Memphis sponsored by the Blues Foundation, which saw him competing against musicians from all around the world. He was also a finalist in 2011. Beloved Texas singer/songwriter Ray Wylie Hubbard even posted on Twitter: “I dig that cat – the Mighty Orq stands flat-footed and delivers pounds of solid blues with whatever he plays.”

Born Josh Davidson and raised in Houston, he got the nickname, “Orq,” in high school, which later became “The Mighty Orq,” so dubbed by fellow Houston bluesman Tony Vega.

Since 2002, The Mighty Orq has been performing solo and with his band across the USA and Europe. He has won multiple awards, previously released six albums and an instructional DVD for solo resonator slide guitar. He is a uniquely talented singer, songwriter, and multi-instrumentalist with a focus in the American roots music genres.

The Mighty Orq has also been a frequent winner at the Houston Press Music Awards, garnering honors as “Best Blues Act” in 2015 and 2012; and “Best Guitarist” in 2010 and 2007. He also was awarded an Individual Artist Grant from the Houston Arts Alliance in 2011.