The Mike Henderson Band :: IF YOU THINK IT’S HOT HERE 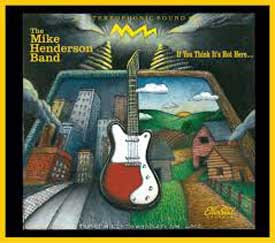 Renowned musician, singer-songwriter Mike Henderson has come full circle with this long awaited CD, If You Think It’s Hot Here on EllerSoul Records, and the return to his blue’s rockin’ roots. A thirty plus year veteran of the music industry, he has worn many hats.

“Mike Henderson’s ability to play the blues seems endless and so inspired on these new recordings! It was a true honor to share the stage with him this past summer at Red Rocks playing the music of Muddy Water and Howling Wolf. My only regret is I didn’t ask him to sing one….! Killer blues by a band of world class musicians.” – Joe Bonamassa

Henderson is a Grammy nominated songwriter, having written many songs recorded by a wide range of artists. He’s also an ‘in demand’ guitarist, lending his skills to countless recordings. As a band leader, he not only handles the vocal and guitar, but also blows some very impressive blues harmonica. All of his Bel Airs, Snakes and Bluebloods fans will rejoice upon hearing this new release.

The Mike Henderson Band still holds court every Monday night at Nashville’s famed Bluebird Café, laying down the many shades of the blues…you better get there early, there’s always a line.