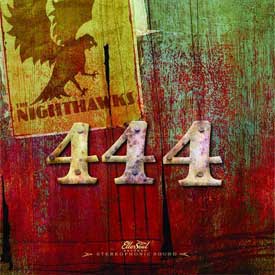 444 is The Nighthawks label debut on EllerSoul Records from this celebrated, seminal American roots rock band legend, armed with more great original songs, plus killer covers of Elvis, Muddy Waters, The Everly Brothers & the Du Droppers. 444 is jammed packed with 13 tracks of blues, soul, rock n’ roll and roadhouse country music, all given the trade Nighthawks combination of talent, passion, energy and showmanship that has made these Blues Music Award winners a truly one-of-a-kind, live listening experience, conveniently packaged on disc and ready to take home and enjoy.

Now in their fifth decade of recording and live performing, the 21st century Nighthawks are a tight, cohesive unit – the kind that comes only from years and miles. Guitarist Paul Bell and bassist Johnny Castle have been in the band for more than a decade; drummer Mark Stutso, the “new kid,” is starting his fifth year; and founding member singer / harmonica player Mark Wenner is counting 40 plus. The nightly consensus from fans is that this version of The Nighthawks is the best ever. The concept that was mapped out in the liner notes of their 1974 debut recording, Rock and Roll, has grown into a powerful expression of the American musical tradition.

444 draws from the deep roots the band has always mined; and organic mix of originals and classic cover tunes. Almost every Nighthawks recording has featured at least one Muddy Waters tune, and 444 is no exception. This time the band showcases its acoustic version of Muddy’s “Louisiana Blues” (staying close to the country blues of Muddy’s original version), recalling their Blues Music Award-winning acoustic release, Last Train to Bluesville, and Muddy’s live introduction on the band’s Open All Night album. As the legend said that night way back when, “They have a beautiful name. They are THE NIGHTHAWKS.”