The Nighthawks :: BACK PORCH PARTY 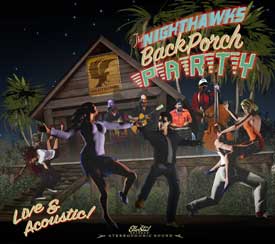 The Nighthawks, America’s seminal roots music band, throw a Back Porch Party on their new EllerSoul Records CD, and everyone’s invited. Following up the critical success of their 2014 label debut CD, 444, the Washington, DC-based quartet of Mark Wenner (harmonica/vocals), Paul Bell (guitar/vocals), Johnny Castle (bass/vocals) and Mark Stutso (drums/vocals) once again show that they can deliver powerful, moving music in a stripped down acoustic setting.

Recorded live and acoustic at Montrose Studio in Richmond, Virginia, the Blues Music Award-winning Nighthawks showcase an even-dozen set list of songs that run the gamut of roots music, touching all bases with excursions into blues, soul, rock ‘n’ roll, roadhouse country and rhythm and blues, all the while demonstrating that you don’t have to plug in to get electrified!

Along with five original songs from the band’s members, Back Porch Party includes scintillating covers of compositions by Muddy Waters (a band tradition), Lightnin’ Slim, Willie Dixon, Ike Turner and Jimmy Rogers, among others. Bandstand favorite “Down in the Hole” (the theme from the acclaimed TV series, “The Wire”) and “Walkin’ after Midnight,” a song immortalized by country great Patsy Cline, are just two tracks that demonstrate the breadth of The Nighthawks college of American musical knowledge, both live and in the studio.

“It started with a memorial service,” recalls founding member Mark Wenner about the genesis of the band doing acoustic recordings. “it was decided to play with a single snare drum, an upright bass, an acoustic guitar and harmonica, and the vocals would be straight into the air. It worked. After watching a video of the service, the band decided to try this format in smaller venues with tiny stages with minimal amplification.”

Wenner goes on to explain how that unplugged path would lead The Nighthawks to some glorious results. “When Bill Wax, then head honcho at Sirius/XM’s Bluesville Channel, heard about the occasional acoustic Nighthawks, he invited the band into their D.C. studios to record a couple of tunes for their homemade blues jam segments. With very sympathetic engineering, The Nighthawks knocked out an album’s worth of mostly traditional blues in a couple of hours. A week later, Bill presented the band with a wonderfully mixed digital master with permission to use. Last Train to Bluesville was born. It went on to garner a surprising amount of national airplay and win the band’s first Blues Music Award in Memphis in May 2011. It also helped put the band back into the national spotlight, and they followed with their first Legendary Rhythm & Blues Cruise performances and two successful subsequent releases, Damn Good Time and 444.”

After two solid, critically acclaimed electric recordings, The Nighthawks decided to go back to the unplugged route on their new CD. “Having enjoyed both the sound and father/son team of engineers in Montrose Studio in Richmond, Virginia, and mixing some acoustic numbers into the material on our 444 album, it seemed like the perfect place for another unplugged recording. The band and EllerSoul execs also invited a small group of sympathetic listeners in for the recording session. The resulting totally live performance was captured by Bruce and Adrian Olsen and quickly mixed into this presentation of a truly fun event, a Back Porch Party.”