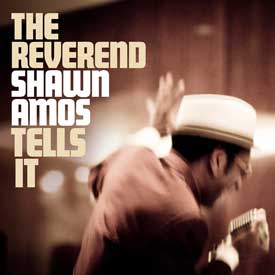 One of the wonders of the blues is the circuitous path some artists take to the “true way.” Singer, harmonicist, songwriter and ordained minister in the Universal Life Church, Shawn Amos is the son of former William Morris agent Wally “Famous” Amos and R&B singer Shirlee May, who grew up in Los Angeles in the 1970’s when his father was booking legendary Motown acts like Marvin Gaye. He would go on to produce and perform with Solomon Burke, and produce John Lee Hooker and Johnny “Guitar” Watson, along with performing and recording his original folk music in the nineties with lyrics from an African-American perspective. Hit hard by the blues “thunderbolt” and compelled to help preserve and honor the roots of the great American classic art form, the glorious result is The Reverend Shawn Amos Tells It, a sensational six-song EP of four covers and two originals in the official “debut” of a new, commanding voice of the blues. “I was doing my singer-songwriter, folkie thing,” Amos recently told longtime friend, musician and the album’s executive producer Steve Jordan (Robert Cray, Buddy Guy, John Mayer Trio), “fusing roots music with a decidedly black lyrical point of view. But the blues…those songs, man. It’s the root – Howlin’ Wolf, Muddy [Waters], Junior Wells – my whole DNA is wrapped up in these tunes. It’s like tracing your family tree.”

Amos recorded the EP amidst the ghosts of great American music, playing in Studio D of The Village in Los Angeles where the likes of B.B. King and Eric Clapton once roamed the halls. It was a bittersweet return to the room where he laid down backing vocals for close friend Solomon Burke’s 2008 “Like a Fire” with producer Steve Jordan (in fact, Amos dedicates “Tells It” to Burke who died in 2010). He later headed to Capitol Records to mix his songs at their studios, drawing inspiration from another era of masters. And to evoke a true vintage spirit, the songs were recorded live with no overdubs.

Amos is joined in his “blues crusade” by Don Medina (drums), Chris Roberts (guitar) and Ed Terrio (bass) as his gutbucket “power trio,” along with Anthony Marinelli (Hammond B-3 organ) and Gia Ciambotti and Kim Yarbrough (vocals). Pungent as a raw onion, John Lee “Sonny Boy” Williamson’s “Hoodoo Man Blues” crackles with energy and commitment as Amos channels Junior Wells combined with his own mojo. He convincingly assumes the narrator’s identity, lamenting his lot with “Everybody tell me, somebody done hoodooed the hoodoo man” with Roberts weaving nasty licks while Amos singes the reeds of his harp. Odiferous funk kicks booty while alternating with swinging shuffle sections on the strikingly original “(The Girl is) Heavy”. Roberts’ tremolo guitar adds a sensuous touch to amplify Amos profanely rhapsodizing “She got two strong legs and one smart mouth. She loves to move them hips and wear me out,” the song intensified by Ciambotti and Yarbrough singing backup in the gospelly chorus.

Showing his inclusive musical embrace, “I’m the Face” by the British rock royalty the Who is given the full-on Chicago blues treatment by way of Billy Boy Arnold’s Latin-tinged “I Wish You Would.” With his harp wailing like a siren in the night and Roberts’ twangy solo to accompany, Amos makes real the boast “I’m the face, baby, is that clear, I’m the face if you want it, I’m the face if you want it, dear, all the others are third class tickets by me, baby, is that clear.” The Elmore James slow, mournful blues classic “Something Inside of Me” in a stripped down, trio format sans overdubs and featuring the piercing “Something inside me, just won’t let me be,” shimmers and sparkles thanks to Roberts as Amos unabashedly exposes and expresses his loneliness with a touch of yearning falsetto.

With the Junior Wells version of “Good Morning Little Schoolgirl” as his inspiration, Amos winks and leers his way through the unfiltered lusty lyrics, his harp cackling along in carnal anticipation. The original R&B ballad “Sometimes I Wonder” is the perfect vehicle for Amos to dig deep and effortlessly with the chilling threat of “I got a dark side on my shoulder, I keep my hands in view. You’re gonna know how my love feels, you’re gonna see what it can do. I’m gonna take me a trip now, I’m gonna fly real soon. Remember me to my children, that man of yours too.”

“It’s funny, the freedom I’ve found in the blues,” Amos reflects. “It changed my voice, my harp playing, and my writing. The two originals on the album came out in a burst, which is always the best gift — and a sign that I’m traveling the right road.”

Rev. Shawn Amos indeed “Tells It” like it is and always will be. He gets way down inside the “mother music” and makes it vital again. With his heart, soul and that indefinable “feel,” he makes the blues hit home as well as being endlessly cathartic.