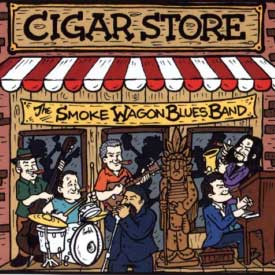 Cigar Store features 50 minutes of new blues classics with tales of the Yukon, New Orleans, voodoo, the underground railroad, lost loves, and even moonshining. Classic R&B, stomping swamp boogies, and new edge barn burners will get you on your feet and remind you of a time when storytelling and music were at the forefront of history.

Formed in 1996, the band became crowd favorites in Hamilton, Ontario’s famous Hess Village. Six independent releases, international radio play, and a large local fan base propelled the band to venues across the continent. The group’s last two albums were international hits reaching the top of the roots and blues charts and garnering 5 star reviews in blues magazines and blogs around the globe. On the home front, the band continues to lead the blues charge in Hamilton – Canada’s Music Mecca. Not only has the band been spreading “Steel City Blues” across the world, but the mayor even became an unofficial member joining the group on sax for special city events.

The band has three Hamilton Music Award nominations for Blues Album of the Year and a Maple Blues Award nomination for Best New Blues Artist. The band’s last studio album, It Ain’t Easy, reached #3 on Canada’s Roots charts (#1 for blues), #13 on North America’s Top 50 Roots & Blues charts, and won the HMA Piano Performance of the Year Award. Live in Hamilton captured the band in their element – performing for their hometown fans. This critically acclaimed album reached #4 on Canada’s Blues and Roots Charts, #11 on North America’s top 50 Roots and Blues Charts, and won Live Recording of the Year at the Hammer Blues Awards. Based on their live performances, the band was selected for the 2016 Memphis Blues Challenge where they became fan favorites during a three-night stand at Club 152 on Beale St.