Thorbjørn Risager & The Black Tornado :: TOO MANY ROADS 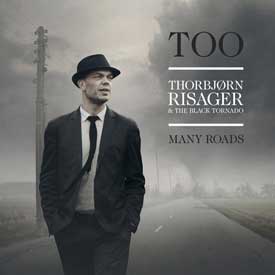 Too Many Roads is the natural next step for Thorbjørn Risager & The Black Tornado. Not just because faithful fans will buy it, but also because it reflects the artistic ambitions, the song writing, and the band’s development as a whole. “The songs work better than ever,” says Risager, “and the sound is the best we’ve had so far.” For this latest recording the band assembled a strong team for its recording session at the Medley Studio in Copenhagen, with Søren Andersen as engineer and Jesper Yebo Reginal in charge of mixing. This time the band has chosen to produce the album itself. “We’ve always had producers on our earlier albums. This time we have taken the big leap of doing the producing ourselves. We’ve put together twelve very strong songs where blues, rock and soul melt together,” says Thorbjørn Risager.

Thorbjørn Risager & The Black Tornado’s success at home and abroad hasn’t happened by itself. The band belongs to the top strata of the Scandinavian blues scene, making themselves heard like few others. This eight-man band, which has been around for ten years, playing blues, rock and soul, is releasing its eighth album, selling lots of records and plays nearly a hundred gigs a year – most of them outside Denmark. Thorbjørn Risager is the natural midpoint in the group. And he happens to be one of the best blues singers Denmark has ever reared. His raw, expressive voice is the fuel that powers the band’s mighty blues motor.

But more than a formidable voice is needed for this vehicle to stay in the fast lane. The songs furnish the rich, thick oil lubricant that is topped up regularly. The rhythm section are the pistons that never fail, while the two guitars supply the masterly electrical features. And then there is the horn section, providing the elegant design that rounds out this blues vehicle’s roadworthiness and comfort.

The Thorbjørn Risager Band began back in 2003. The protagonist plugged his guitar into his amplifier and began writing his own songs. A clear profile of blues, soul and roots-rock emerged, and he was never a moment in doubt as to how the band should sound. An old B.B. King record showed him just what he needed – a big sound with a horn section – and that’s what happened. Today the eight-man band consists of practically the same line-up as when it first began rehearsing over ten years ago.

Audiences like what they do. So do critics and music venues. Which is why Thorbjørn Risager & The Black Tornado – as they’re called today – keep returning time after time to the blues clubs in Sweden, Germany, Belgium, Holland and Denmark, and to festivals and clubs throughout Europe.