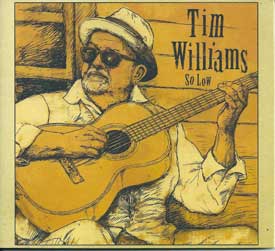 So Low is the solo release by Tim Williams winner, the 2014 International Blues Challenge in the Solo/Duo category is known as, “One of Canada’s finest acoustic blues revivalists and…a terrific entertainer.” Says Sing Out. Williams play all guitars, mandolin and foot tapping No overdubs or multi-tracks, just live. “Conversation halts, glasses still, and all eyes turn on Tim Williams as the room becomes a train stop on a tour of half – forgotten memories in the collective consciousness.”

“Solo (So Low) means just that. No guests, not even any overdubs or edits. Two hands, a good instrument, a voice, and the tapping of a two-tone wing-tip shoe. And nothing plugged in but the microphones and recording gear. I still work most of the time as a solo act and decided it was high time to do a studio recording that way. When I first heard Leadbelly and Big Bill, and when I first saw Lightnin’ Hopkins on television, all as a kid, they played solo and it blew me away. I have never lost my fascination with solo performance, especially on guitar, from Robert Johnson to Richard Thompson. A voice, a guitar, a story, and the means with which to tell it. (from liner notes)

“The 10-track recording, his first ever full album as a solo act, is a magnificent showcase of Williams at his finest — his irrefutable skills as a guitarist, vocalist, writer and interpreter of the blues are laid bare and left to work their magic.” Mike Bell, Calgary Herald

“All the gifts of a Ry Cooder and a dash of bluesy grit.” The Vancouver Province

“Williams is one of the finest purveyors of traditional country blues on the scene today.” Bluesprint, UK