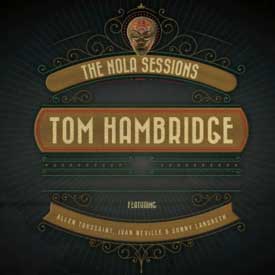 The NOLA Sessions is inspired by the beauty and creative depth of New Orleans. Tom Hambridge set out to produce a biographical blues recording by leveraging the immense talents of local musicians and legends including the late, great Allen Toussaint, Clapton’s favorite slide guitarist, Sonny Landreth, and the B3 mastery of Ivan Neville, as well as rich artistic contributions drawn from New Orleans’ musical heritage. For this eighth solo album Tom and his production team ventured south to The Parlor studios in the Irish Channel neighborhood of uptown New Orleans and gathered some of the best players the Big Easy has to offer. Other guests on this album of 13 original tunes by Hambridge, some in concert with other composers, include The McCrary Sisters and The Naughty Horns, as well as his daughters, Sarah and Rachel Hambridge. This quality production is further enhanced by being mastered at Abbey Road Studios in London in the “George Martin Suite” by Grammy winner Sean Magee.

The album opens with the easy swinging duet “Blues Been Mighty Good To Me,” featuring the amazing piano and vocal of the master of New Orleans soul and R&B sound, Allen Toussaint, on one of the last studio recordings before his untimely death in 2015. The selection is even more appropriate as Hambridge and Toussaint share the honor of being successful songwriters and producers, who have played a crucial role in countless classic songs popularized by other artists.

For many Tom’s wiry tenor may be unfamiliar, but whip crack shuffle back beat from Hambridge is easily identified as demonstrated on the juke joint testimonial “Bluz Crazy.” Louisiana icon Sonny Landreth brings his signature “Slydeco” electric guitar to the sessions, for the first of several appearances, on the swamp rocker “This End Of The Road,” delivering that unmistakable greasy slide sound he is so famous for.

Alumni of the Loyola University Jazz Band, The Naughty Horns, join in on the French Street party anthem “I Love Everything.” Hambridge celebrates of the life of old friend John Flynn on the heartfelt “What You Leave Behind,” beautifully complemented by Neville’s B3 and the Horns’ Last Waltz quality arrangement, and then delivers an authentic second line groove for the twisting stomp “Little Things,” boldly declaring “the more you don’t give a sh*t, the easier it is to sleep, so I don’t let the little things bother me.” On the tome of a tormented man “Whiskey Ghost,” (a co-write with Gary Nicholson) which first appeared on Hambridge’s 2013 collaboration with Buddy Guy for the album Rhythm & Blues, Landreth and Tom take the spooky rhumba further down the bayou. Music director and guitarist for Daryl Hall’s highly acclaimed show Live From Daryl’s House, Shane Theriot, rips hot lead licks and the McCrary Sisters provide the Sunday go-to-meeting backups for the Gospel rocker “Save Me,” which was co-written by piano man and former member of Derek and the Dominos, Bobby Whitlock.

Hambridge pays tribute to all things “strong,” good, bad and ugly, by comparing them to what he longs for on the edgy “A Couple Drops,” before slowing the pace on the spacious Father and Son epic “Masterpiece.” The torrid tale of a road warrior, “Me And Charlie,” is dedicated to Buddy Guy’s trusted bus driver Charlie McPherson and features more scorching “Slydeco” leads. Prolific Nashville songwriter Jeffrey Steele, worked with Hambridge on the contemporary country ballad “Trying to Find It,” an expansive track that is anchored by stellar piano from Kevin McKendree and soaring leads from top session guitarist Rob McNelley.

The NOLA Sessions close with an in-depth study of one of our most human qualities and conceptions, “Faith,” with the soulful vocal of Hambridge backed by fingerpicking guitar from John Fohl and the mournful cello of Nathaniel Smith to punctuate the introspective treatise on one of the most powerful forces in the universe.