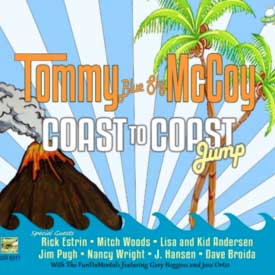 Tommy “Blue Sky” McCoy has released his new CD, Coast to Coast Jump, and it is BMA bound. Green Swamp Records has submitted it to the Blues Music Awards for 2019. This is Tommy’s 9th CD and his best to date. “This is a modern jump blues record,” McCoy notes, “combining traditional elements of West coast jump with my contemporary songwriting, bare-bones production and minimalist combo interplay.”

Recorded at Greaseland Studio in San Jose with Kid Andersen who helped enlist an all-star lineup to record this most relevant album. The end result… a smart, well produced, original jump CD, featuring blues luminaries with performance off the charts. Start with Mitch Woods, piano extraordinaire, who put a touch of class on the ivories, followed with Jimmy Pugh blowin’ up the B3, as does Nancy Wright on the sax and McCoy’s unique guitar style. All 11 cuts are strong recordings, with first-rate performance, showcasing original McCoy compositions, all but one, a cover of Zappa’s iconic “Cosmik Debris” featuring Rick Estrin bringing the characters to life as he recites Frank’s storytelling dialog. “Guava Lava” is another dynamic track, slightly outside the box, bringing a Latin flavor into the mix, featuring sultry vocals by Lisa Andersen. Two songs were recorded in Florida with Tommy’s touring band “The FunDaMentals.” All songs exemplify the nature of experienced blues at its best, when performed by some of the top blues professionals in the world. Tommy McCoy has always maintained high standards and blues integrity with his entire catalog and spanning his incredible 50-year musical journey. Guests on Tommy’s recordings over the years include such musical legends as Rock n Roll Hall of Fame’rs – Levon Helm and Garth Hudson, Chris Layton and Tommy Shannon along with such blues greats as Lucky Peterson, Tony Coleman, Commander Cody, Gregg Allman band alumni, and many others… 4 catalog CDs are now European Imports.

Tommy had a top 10 hit song on the Blues charts with his tribute song to B.B. King, “The King Is Gone.” His 25-year Retrospect double CD set on Earwig records went to number 14 on the International Blues Charts. Tommy is currently working on his “Annual Reunion Benefit Concert” Labor Day weekend in his hometown of Warren, Ohio. This will be his 10th year in a row and proceeds this year go to his Howland High School to build a recording studio.

With a track record of years of blues dedication and developing business relations in this crazy world of the blues, Tommy McCoy’s new CD, Coast to Coast Jump, is destined to capture the hearts and musical minds of the most discerning blues aficionados. “If you are on the BMA nominating committee, thank you for considering my new CD for the BMAs.” Look for Tommy and the FunDaMentals at the Ocktoberfest Festival in Roanoke Rapids, NC in Oct. with dear friend Cleve Baker.