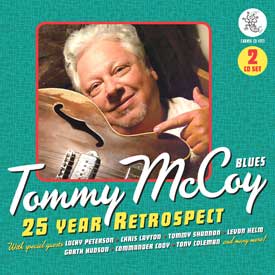 Tommy McCoy 25 year Retrospect is a 2 CD Blues Anthology from EARWIG Music Co featuring a choice collection from Tommy’s 7 domestic CD releases and 4 European imports. There are 3 new cuts in the package as well as his top ten hit, “The King is Gone,” a moving tribute to the late great B.B. King. The album has received worldwide airplay and charting on the Blues Roots chart, the Blues/Rock charts and the International Blues chart.

The song was recorded last year in Athens, Greece, while Tommy was there on tour with Theodore Alexiou. Also, prevalent guests on Tommy’s 25 year Retrospect include Levon Helm and Garth Hudson of The Band fame, Chris Layton and Tommy Shannon of Double Trouble reknown, as well as Commander Cody, Lucky Peterson and Tony Coleman of The BB King Band.

Tommy’s top notch touring band is a varietal brand of blues including his traditional meanderings, as well as some Americana sampler, mixed in with his signature rockin’ contemporary blues. This is an original artist, showcasing his years of dedication to the blues while indulging his entertaining professionalism in every song and performance. His talent is honest and vocals uncontrived, focusing on his unique guitar prowess and thoughtful songwriting skills. Having extensive tour experience in Europe, Norway, Finland, UK, Germany, Greece and domestic, you are guaranteed a quality level of performance and production.

Tommy McCoy is a 40-year veteran of the Ohio and Florida blues scenes. He’s been playing guitar since he was eight years old, and has released seven albums over his career. McCoy is the complete package in blues entertainment, soulful vocals, smoking lead guitar work, and mad songwriting skills. Recently, McCoy released 25 Year Retrospect (Earwig Records), a two-disc set that should go a long way toward making him better known.

Tommy will be in Clarksdale to complete a book for a blues based movie screenplay. He has also been diligent in producing other artist recordings as well as developing music related products (Microphome mic cleaner).

Tommy is seeking festival, concert and club bookings. He has extensive tour experience in Europe and the USA. All Tommy arrangements are being handled by Retro Media MGMT Tampa Bay, Fl.