Too Slim and The Taildraggers :: ANTHOLOGY 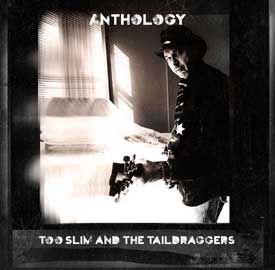 Tim “Too Slim” Langford with his Taildraggers roared out of Spokane, Washington in 1986 like a man with his hair on fire. The virtuoso guitarist, passionate singer and poetic songwriter remains possessed to play the blues his way with blockbusting power and the talent to create timeless music like his life depended on it. 28 years, countless emotionally draining shows and 18 albums later find him with an ongoing recorded legacy. Showcased on this monumental 2-disc release, Anthology, are 34 select songs, including three new tracks produced by noted Grammy winner Tom Hambridge.

The sumptuous extravaganza opens with the hypnotic swamp-rocker “Wishing Well” co-written by Langford and Hambridge and featuring scorching solos. “Little Gun Motel” by Hambridge and Texas bluesman Jim Suhler rocks a riotous, heavy boogie shuffle as Slim proves he is a reigning slide wizard. The third new cut, “Big Ole House” (Langford and Hambridge), is a haunting ballad of lost love with Langford exposing palpable regret with his blues-worn vocals while sensitive fills of pianist Jon Coleman and the entire rhythm section intertwine in a stunning innovation to the Taildragger sound.

Every archival track is as vital as the day it was recorded. “Stoned Again” has Langford sliding and slithering at his nastiest on a “smoking” shuffle groove verging on combustion. “Wash My Hands” rides a memorable hard rocking riff about finding salvation. Langford “raps” his rawboned bio on “Cowboy Boot”, a clanging, big bore rocker with the wry hook.

The Norteno-flavored funky “Mexico” is a jovial tribute to the virtues of visiting our southern neighbor for relaxation. Chunky funk-rock on “Been Through Hell” finds Langford preaching the sage advice. The cathartic slow blues “Good to See You Smile Again” boasts a soaring solo from Langford to complement Jimmy Hall’s heartfelt vocals. “Everybody’s Got Something” with guest soul singer Curtis Salgado is an uplifting rock “spiritual” featuring a worthwhile message couched in an infectious groove. Reminiscent of Blind Willie Johnson’s classic “Dark is the Night, Cold is the Ground”, “La Llorona” is an unaccompanied slide instrumental carrying immense, unforgettable emotional weight.

Tim Langford has that rare ability to make believable every note he sings and plays, along with the veracity of each tale, tall or otherwise. Now a resident of Nashville, he is currently being honored along with six other artists in the Country Music Hall of Fame and in a prominent exhibit at the airport. His exposure in “Opryland” can only further the cause of spreading his musical “gospel” to a wider audience.

Jimmy Thackery and The Drivers :: WIDE OPEN You are invited!