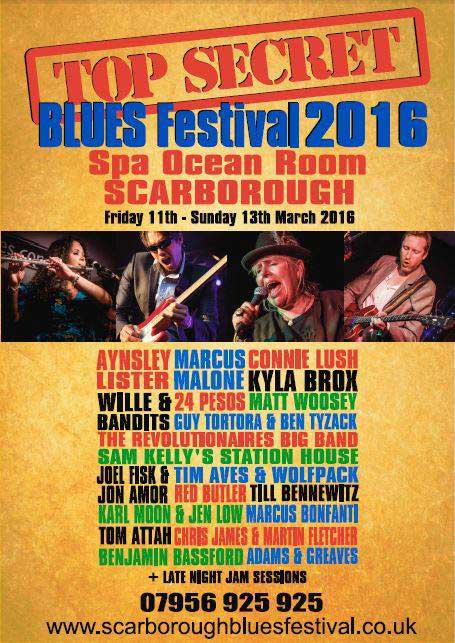 Friday the music starts with Aynsley Lister at 7pm and finishes with a jam session until 2am. A new feature in 2016 will be the Late Night Jam Sessions on Friday and Saturday nights. These will both feature most of the artists from the festival including Aynsley Lister, Till Bennewitz, Joel Fisk, and many others.

On Saturday the festival music starts at 12.30pm and will feature a host of artists that include Matt Woosey, Willie and the Bandits, Connie Lush and more and continues until 2am.

Sunday starts up again at 12.30pm and will finish with the Aynsley Lister Band and the After Party. The 2016 After Party will feature TC & The Moneymakers, a popular house-rocking band that has been featured at previous festivals

Scarborough’s TOP SECRET Blues Festival is a not-for-profit organization. They receive no public funding, no arts council grants, and no large scale sponsorship. This means they must pay their way and cover the entire cost of the festival from ticket sales and other fund raising efforts. Chief among these is the ‘Top Secret / World Famous’ raffle with many top quality prizes, including a luxury hotel break, multi-CD Packages, cases of wine, etc. Please bear this in mind when ordering your tickets and throughout the Festival. They are hoping to raise a substantial amount in 2016. This may be essential if they are to invest in their future. Ticket sales alone are never enough.