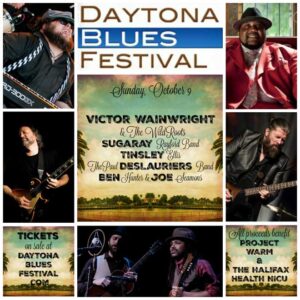 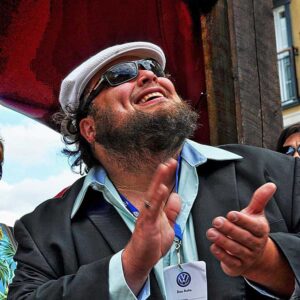 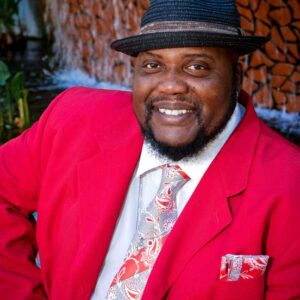 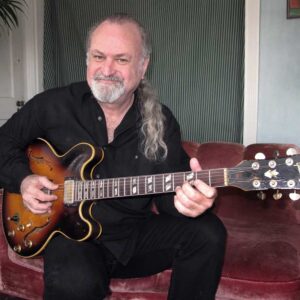 (Daytona Beach, Florida) The final day of the 7th annual Daytona Blues Festival kicks off at 1:00 pm and concludes with local legend (who we share with Savanah and Memphis) Victor Wainwright and the WildRoots. Entertaining the crowd before Victor, fresh off 4 2016 BMA nominations, is the Sugaray Rayford Band. Also playing Sunday are guitarist extraordinaire Tinsley Ellis, IBC band runner-up The Paul Deslauriers Band, and IBC solo/duo champs Ben Hunter and Joe Seamons. Everything must come to an end, and the end of the 2016 Daytona Blues Festival will be one to remember.

Victor Wainwright needs no introduction to blues fans. Yet many may not know of his connections to the Daytona Beach area. Victor studied air traffic control at Daytona Beach’s Embry-Riddle Aeronautical University. While at ERAU, Victor played local clubs, solo and accompanying other local artists. He also met frequent collaborator and original WildRoots member Stephen Dees. While born in Savanah and finished off with a heavy dose of Memphis, Victor’s high-octane boogie piano and soulful vocals simmered and their flavor deepened during his stay in Daytona Beach. When he returns, Victor always bring something special you don’t want to miss.

Although the Sugaray Rayford Band has been around since 2010, Sugaray found his greatest notoriety as lead vocalist of the blues super group Mannish Boys. He sang lead on 9 tracks on their 2013 album that won the Blues Music Award for Best Traditional Blues Album that year. In 2016, Sugaray’s solo efforts received 4 BMA nominations, including the prestigious BB King Entertainer of the Year (which went to our headliner Victor Wainwright!). At 6’ 5”, Sugaray is a large presence in the blues, but his performances and song writing are every bit as big as his frame.

Georgia based Tinsley Ellis brings his dazzling musicianship to the Daytona Blues Festival stage prior to Sugaray. Tinsley’s new album Red Clay Soil celebrates a legacy built on four decades of performing, recording and song writing. Over the past 40 years, Tinsley Ellis has performed in all 50 states, across Canada, Europe, South America and Australia. He’s taken the stage in Russia, the Canary Islands and other destinations not on the traditional touring circuit. His vision for the future is to continue to release the type of albums that push the boundaries of Blues and to expand his touring radius. And that expanded radius brings Tinsley to Daytona Beach Sunday.

2016’s final IBC act are Canadians The Paul Deslauriers Band, who placed 2nd in the band competition. They are currently touring Canada and the United States in support of their new album Relentless. Undeniably part of Canada’s musical elite, all three members are regular nominees and winners at the Maple Blues Awards and Quebec Lys Blues Awards. Fans can’t go wrong with this band which features extraordinarily inventive guitar playing, powerful vocals and a fantastic rhythm section.

Opening Sunday are 2016 IBC solo/duo winners Ben Hunter and Joe Seamons. They will also be playing our Riverfront stage Friday and Sunday. Despite the stage time, fans will undoubtedly want more of this duo’s unique take on blues and roots tradition. Ben and Joe aren’t just multi-instrumentalists, they are historians, with stories accompanying their songs almost as powerful as the songs themselves. No matter how you spend Saturday night, make certain you’re on time Sunday for an act you will be talking about for years to come.

So book your hotel rooms and get your tickets for the Daytona Blues Festival. From Friday’s opening to Sunday’s finale, it is truly the best blues at the nicest time of the year.