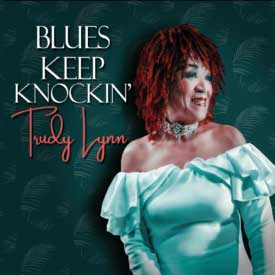 “I want to thank all my blues fans new and old, or should I say ‘mature,’ for being with me through my journey with the blues, both near and far,” Trudy says in the album liner notes. “My name is Trudy Lynn and I sing the blues for you, some old some new and some borrowed too. I love singing the blues! The blues knocks on my door, on my window and my heart. I must sing, and I sing only what I feel, and I sing to make you feel exactly what I feel!”

Blues Keep Knockin’ features ten soul-drenched songs dripping with blues and R&B. In addition to a new original song written by Trudy (the album’s title track), she puts her own stamp on covers of songs from Etta James, Aretha Franklin, Big Maybelle, Big Bill Broonzy and Jimmy Rogers, among others.

“I am so grateful to all the musicians who contributed their talent to this recording,” says Trudy, “with very special heartfelt thanks to producer Rock ‘Papa’ Romano for all the time and effort he dedicated to this CD. (Can’t nobody call him ‘Papa’ but me!!)

“I also would like to give a special thanks to my ‘daughter’ … as I call her, Miss Carolyn Wonderland, who graciously added her talents to this recording. I can recall when she was just starting her blues career; she has blossomed into a force to be reckoned with. Our friend Jerry Lightfoot is smiling down on you. Love you baby girl!”

Blues Keep Knockin’ is Trudy Lynn’s 13th solo album and her fourth release on the Connor Ray Music label, following up on I’ll Sing the Blues for You (2016), which garnered a Blues Music Award nomination for “Soul Blues Female Artist.” That was preceded by 2014’s Royal Oaks Blues Café, which hit #1 on the Billboard Blues Chart; and 2015’s Everything Comes with A Price, which spent four months on the Living Blues Radio Chart. Trudy was also inducted into the Houston Music Hall of Fame in 2015.