Trudy Lynn :: I’LL SING THE BLUES FOR YOU 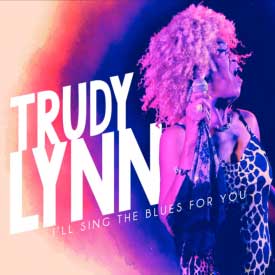 I’ll Sing the Blues for You (Connor Ray Music) from acclaimed Houston-based blues singer Trudy Lynn, features 10 tracks dripping with blues, soul and R&B, and includes her unique takes on songs from Big Mama Thornton, Lowell Fulsom, Memphis Minnie and Johnny Copeland, among others, as well as the funky original, “Thru Chasin’ You,” destined to be a fan favorite. Backing Trudy on the album are label president Steve Krase on harmonica, David Carter on guitar, Terry Dry on bass, Randy Wall on keyboards and Matt Johnson on drums.

“Choosing material for this album was quite an adventure,” says Trudy about I’ll Sing the Blues for You. “In my musical career, there are so many blues artists that I have been inspired by.”

In the new album’s liner notes, Trudy explains how its title came about. “As I’ve said in a previous recording of mine, ‘Everybody’s Got a Blues Song to Sing.’ One day my daughter gave me a gift of business cards, and on the top of each card was, Trudy Lynn: I’ll Sing the Blues for You! As I was looking at the cards, she said, ‘Mama, that’s what you do. You sing the blues for everybody.’ During so many of my performances, a fan will come up to me to say, ‘You were singing that song for me. That’s why I came!’ I take these compliments as stars in my crown, like flowers in my garden.”

I’ll Sing the Blues for You is Trudy Lynn’s 12th solo album and her third release on the Connor Ray Music label, following up on 2014’s Royal Oaks Blues Café, which hit #1 on the Billboard Blues Chart; and 2015’s Everything Comes with A Price, which spent four months on the Living Blues Radio Chart. Trudy is also a five-time Blues Music Award nominee and was inducted into the Houston Music Hall of Fame in 2015.

Trudy Lynn was born Lee Audrey Nelms in Houston’s Fifth Ward, where she began singing as a teenager. After high school, Lynn went to visit her aunt in Lufkin, where a club called the Cinderella needed a singer. She decided Lee Audrey Nelms wasn’t going to cut it as a stage name. The club had a bunch of cartoon character names painted on the wall and she noticed “Trudy,” which she quickly paired with Lynn. “Lynn was something in those days,” she recalls. “Gloria Lynne, Barbara Lynn. I thought, ‘I’m going to be one of those Lynns, too, baby.’”

Prior to striking out on her own, Trudy was the vocalist for such Texas greats as I.J. Gosey and Clarence Green, where Trudy spent five years as the vocalist for his band. Green was a stern mentor, but Lynn credits him with helping her become a professional. “He molded me well,” she says. “He’s still in me because of what he taught me. It takes that.” After leaving Green’s band, Lynn began performing on her own.

For years she struggled to get recorded in a manner deserving of her talent, until 1989 when Trudy signed with John Abbey’s famed Ichiban label and provided the opportunity for her to tour the world and perform at the most prestigious festivals, including Lucerne and the Chicago Blues Festival. While at Ichiban, producers had a strong hand in directing her recordings. Since joining forces with harmonica wizard Steve Krase and the Connor Ray Music label in 2014, Lynn has played curator for herself. She has been writing original songs that blend nicely with the vintage material. The songs are mostly about good times and bad men. “Each one of these songs means something to me,” she states. “I truly understand something about each one of them.”