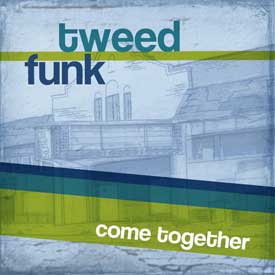 On April 29, 2016 Tweed Funk will release their 4th album, Come Together, which consists of 10 new original songs. The band made a concerted effort with the new album to focus on writing quality songs as opposed to writing to a formula. Early reviewers are calling this the best Tweed Funk album to date and it is drawing comparisons to late 60s soul icons as well as current artists on Daptone Records.

“But Come Together — incredibly — is its best offering yet. The inspirational and autobiographical ‘Sweet Music’ is on par with Daptone Records soul darlings Sharon Jones and Charles Bradley.” – Milwaukee Journal Sentinel

“This disc offers superb songwriting, vocals reminiscent of an earlier era, musicianship that drives it home and background vocals I haven’t heard the likes of since the 60s. When I heard this for the first time, and realized that it was all original material, I was floored.” – Reflections in Blues

Front man Joseph “Smokey” Holman, who is currently battling multiple myeloma cancer, brought the lyrics of guitarist JD Optekar to life – crafting melodic lines that are sweet and soulful. Special guest Doug Woolverton (trumpet) of Roomful of Blues appears on the entire album along with special guests Chrissy Dzioba and Sara Moilanen of The Whiskeybelles who lend their backing vocals to five of the new songs.

“Right from the jump, ‘Light Up the Night’ grabs your attention and sets your body in motion with its resounding horns, smooth percussion and grooving bass line. Then the smooth as butter vocals of front-man Joseph ‘Smokey’ Holman kick in with lyrics that, at first, come across as depressing, but when the chorus hits with, ‘Tell the haters to beware, doubters can doubt, you don’t care,’ you discover a song of determination disguised as an upbeat dance tune. The backing vocals of Chrissy Dzioba and Sara Moilanen of The Whiskeybelles add the perfect exclamatory punctuation. Another favorite track is ‘Who Is This,’ a greasy, jazz-infused, sliding note instrumental that showcases the talents of saxophonist Andrew Spadafora and Roomful of Blues veteran, Doug Woolverton on trumpet.” – American Blues Scene

Tweed Funk’s album was recorded at Makin’ Sausage Music in Milwaukee, WI and engineered, mixed, and mastered by Steve Hamilton. The band has released a music video for “Love Ain’t Easy” – the video was shot and produced by Jon Taylor of MKE Video.

Markey Blue :: THE BLUES ARE KNOCKIN’ We asked for it… you Delivered!