Val Starr’s Blues On The Patio 2015 returns to Sacramento, CA with a great lineup! 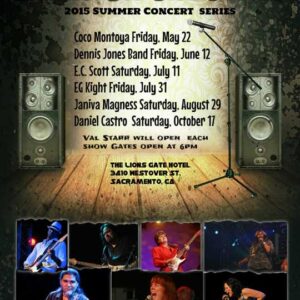 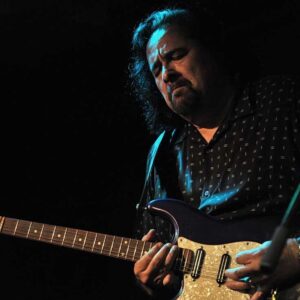 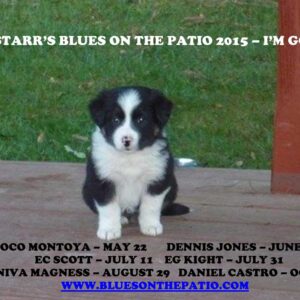 The series kicks off on Friday, May 22nd, with award winning blues guitarist and Ruf Records recording artist, Coco Montoya. Guitar One Magazine calls guitarist/vocalist Coco Montoya “the hottest southpaw in the blues” and raves about his “master touch and killer tone.”

On Friday, June 12th, the Dennis Jones Band hits the Patio hard with blistering blues that you can rock and dance to! Winner of the International Blues Competition in 2004 (Zac Harmon Band), he packs a powerful punch with his high-energy stage performance, sizzling-hot guitar solos and smooth and soulful vocals.

On Friday, July 31st, the Patio is pleased to welcome, Chicago blues performer, E.G. Kight. She has worked with numerous top blues musicians including Luther Allison, Pinetop Perkins, Taj Mahal, B.B. King, and Koko Taylor. E.G. has released 8 albums and received a number of Blues Music Awards nominations for both contemporary female artist, and song of the year.

Saturday, August 29th brings yet another incredible award winning blues diva, Janiva Magness, to the Patio. Winner of The Blues Foundation B.B. King Entertainer of the Year in 2009, Janiva became the second woman, after Koko Taylor, to be so honored. Since 2006, she has had 22 blues nominations. USA Today stated, “Magness is a blues star.”

On Saturday, October 17th, the series closer and the only blues act to return to the patio from last year’s lineup is The Daniel Castro Band. A Sacramento and Bay area blues band favorite, Daniel brings crowds to their feet with his blistering solos, soulful singing, and tight arrangements.

Val Starr & The Blues Rocket kick off each show with a bang performing original, high energy, dance-oriented blues. Her 2014 release, Blues Away, reached #4 on the Airplay Direct Blues charts. Her newest CD, Woman On A Mission, is scheduled for release in September of 2015.

Gates will open at 6 PM for all shows, general admission seating, so get there early to get your favorite seat. The Blues On The Patio is a Holmes Ellis Production. Tickets are $15 per show, and discounted Season Passes are available for $75 (save the price of a show). Where else can you get Six Great Shows for such a great price! It’s a no brainer!

More information is available at www.bluesonthepatio.com and you can always call 916-225-0209 and speak to JohnE if you have more questions. See you on the Patio Friday May 22 with Coco Montoya! Thanks!

Bonnie Raitt, Paul Rodgers and Boz Scaggs to Headline the Doheny Blues Festival, May 16-17 Rock And Roll Hall Of Famer Elvin Bishop To Appear On CONAN TV show May 11