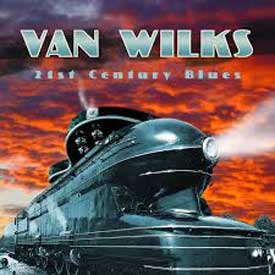 21st Century Blues is Texas-based guitarist Van Wilks’ first studio album in 10 years. Van Wilk’s has won awards as Best Guitarist for both electric and acoustic categories and Best Blues-Rock Band four years in-a-row in the Austin Chronicle music poll and voted into the Austin Chronicle Texas Music Hall of Fame. Produced by Van Wilks, 21st Century Blues was recorded and mixed by Chet Himes at Relentless Ranch Studios in Dripping Springs, Texas, and Chicken Run Studios in South Austin. Texas-sized special guests on the new CD include Grammy-winner Christopher Cross and Austin vocal hero Malford Milligan, both of whom appear on “She Makes Me Crazy,” a song written by Cross (who also plays guitar on the track) with Milligan adding his trademark dynamic voice. Also making his presence known on 21st Century Blues is the legendary Billy F. Gibbons, who co-wrote “Drive by Lover” with Wilks, a song that made its initial appearance on an earlier ZZ Top album.

“The new record is my take on contemporary blues,” Wilks says. “I have a profound respect for the American masters, and I’m thanking those guys for paving the way with these tunes. This is not a typical ‘blues’ record.  But this is my blues and even though the songs jump from one feel to another, the common thread that holds it all together is my guitar. It’s just that low down, wound up, rockin’ Texas blues!” he adds.

And “typical” it is not, as Wilks and his smoking backing band that includes players who’ve graced sessions and stages with greats such as Eric Johnson, among others, tear through an even-dozen tracks that run the blues-rock gamut with a modern muscle, while staying true to the American roots music icons. From the opening guitar hooks of the album’s lead-off track, the rocking “Strange Girl,” to the closer, “Midnight Crossing,” an atmospheric instrumental that begs to be recorded on a film soundtrack, Van Wilks covers some major roots musical landscapes on 21st Century Blues.

Van Wilks has been a vibrant part of Austin’s celebrated music scene for a long time. Over the years, Wilks and his band have toured nationally and internationally with acts such as ZZ Top, Heart, Journey, Aerosmith and countless others. Their travels have led them on a scorched earth path from Texas to Moscow, the Virgin Islands to India, and everywhere in between. Along with that, Van Wilks was featured on ZZ Top’s Live at Montreux Jazz Festival DVD released in 2014.