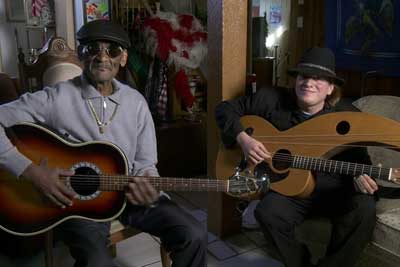 By Justin McElroy-GlobalNews.ca – Michael Thompson strums his guitar and rasps out another song from his seemingly endless catalogue. “Sometimes you get the blues – and sometimes the blues be you,” he sings.

Thompson, who goes by the stage name Black Velvet, was homeless and busking on the streets of Victoria for over four years. Today he has a house, a resurrected music career and is now in Toronto for the holiday season, meeting his grandchildren for the first time.

And if you ask Thompson where the transition started, he’ll point to a simple CD he was given on Christmas day five years ago. “It was one of the best Christmas gifts I could ever receive,” he says. “I could house myself, I could eat better…that was the moment.”

Thompson, now 59 years old, has always been a blues musician. “My dad played ragtime stuff. He played in various blues bands, mostly the thing that influenced me was the Chicago style. It made people want to get up and dance,” he says. “I was blessed with it. I’m able to tap into it at any time. Some people study all their life…it flows through me.”

A travelling musician most of his life, Thompson went through a rough patch last decade after his mother died and he became homeless. “It was horrible. It would be okay [being in a shelter] with a few people, but you’re talking a couple hundred people each day…the things everyday people take for granted, like taking a shower, you wouldn’t be able to do that,” he said. “I really didn’t sleep much. I slept in the day time when local organizations were open…but mostly just walked around at night.”

But music was always there to sustain spiritually and financially, as some companies would let him busk in front of their properties. “I always had music to keep my head at least at level, and sometimes above ground.

One of the people listening to his music was Kevan Carlsen. A young musician new to Victoria himself, he enjoyed listening to Thompson play and wanted to find a way to help him. “He blew me away when I first saw him,” said Carlsen. “I love blues music, but a lot of the guys I see playing seem like they’re imitating or something. But Mike, if it’s not his song it feels like it by the time he’s done with it. He feels it.”

Carlsen and his fellow musicians decided to record Thompson playing on day so a CD could be made. “At some point I said ‘I’ve had enough. Nobody’s ever heard Michael’s music and maybe nobody ever will, except the people downtown.’ It was about preserving music.” It took them just an hour to record it – “he just nailed it like he does every time” said Carlsen – and the CD was ready on Christmas Eve. The only problem? They couldn’t find Thompson. “It’s a bit hard to find Mikey. You see him when you don’t want to, but when you’re looking for him, good luck,” said Carlsen.

Thompson heard from local media that Carlsen was looking for him and got the CDs on Christmas Day, 2009. Word quickly spread about Thompson’s story, and his talent. Some weeks later, he was invited to perform at Hermann’s Jazz Club, one of the top music venues in Victoria. The line spilled out the door. “After I had my first CD, people began to know me better,” said Thompson. “My life really changed for the better.”

“If it wasn’t for music, I would have lost myself a long time ago.”