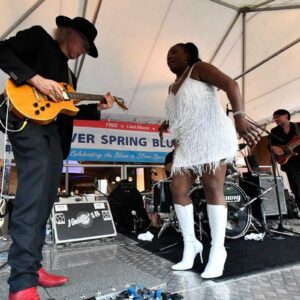 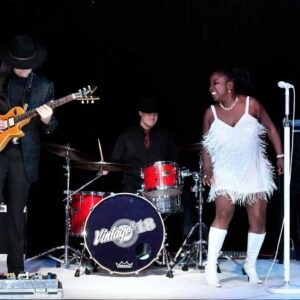 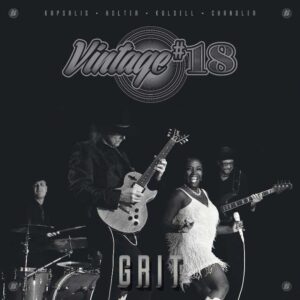 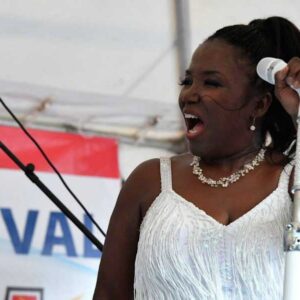 “…Stand-out vocals from singer Robbin Kapsalis, a lady who has a powerful probing voice and range steeped in southern blues and soul quality…In truth, this is a rock-solid album, bursting with Memphis soul, Stax and Chess-inspired tradition and history…”

“…Although this outfit is undoubtedly a blues band, they have a distinctively individual sound, based around Bill Holter’s original guitar work…”

D.C.-based Soul Blues Band Vintage#18 makes an impressive debut with their album Grit. Their album hit the Roots Music Report’s Soul Blues Album Chart at #5, and as of this writing has stayed in the Top 3 for ten weeks and counting. Every song on the album has made the Soul Blues Singles Chart, with five songs in the top ten. The album reflects the band’s love of classic 60’s soul and blues, featuring original music from the band as well as their looks at ZZ Top and Bob Dylan, both of which get the serious blues treatment.

The buzz from their hometown of Northern Virginia speaks of the bands engaging live shows and the energy of Robbin Kapsalis. The reviews from Australia, Europe and the U.S. have been enthusiastic and airplay has been very strong. They agree that Vintage#18 is one to watch.

The band, recently nominated for a Blues Blast Music Award – New Artist Debut Album, chose to self-produce Grit, and a framework was in place before most of the album was written. One of the goals when they first started was to make sure that the sound didn’t fit solely into a single genre, but still keeping the foundation of the blues. Other familiar elements such as soul, funk, and rock appear in a way that brings unexpected experiences for listeners and dancers too. This idea worked well in live settings, so the album was done the same way. As the band likes to say, “We’re here to move you, one way or another.”

Performing together since 2013, the band started in the clubs near their home in Northern Virginia. Residencies in Washington, D.C., Maryland and Virginia are the backbone of a circuit that extends across the Eastern Seaboard. In 2016, they represented the Central Virginia Blues Society at the International Blues Challenge in Memphis, Tennessee. Along the way, they’ve been fortunate to share the stage with several great performers, among them The Nighthawks, Billy Price, Lil’ Ed and the Blues Imperials and Albert Cummings.

The sound reflects their love of traditional blues and soul but also the desire to bring it current for new audiences. Vintage #18 delivers a high-energy show that has become the band’s signature. The framework highlights the unique sound of Bill Holter on guitar (a.k.a. #18), and the soulful vocals of newcomer and bandleader Robbin Kapsalis. The ground floor is laid down by Alex Kuldell on drums and Mark Chandler on bass. The collective good-mojo-get-down is provided by all.

Vintage#18 is excited about bringing their energy to festivals in North America and overseas.