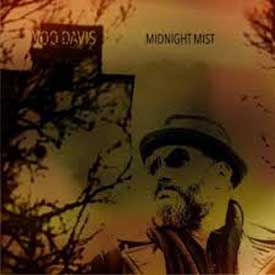 Guitarist/singer Voo Davis’ Midnight Mist is the third CD from this talented musician whose musical sound gumbo encompasses the roots of blues, with additional flavorings from Americana and jam band spices. Produced by Davis and recorded in organic analog sound at Bogalusa, Louisiana’s Studio in the Country, Midnight Mist includes a bonus video of “Riverside Blues,” filmed in and around Clarksdale, Mississippi, that perfectly captures the spirit of the new music on the album.

“Being able to return to Studio in the Country and expand my guitar sounds was something I really looked forward to on this project,” says Davis about the recording sessions. “The tones were something that I really wanted to play with, not just get stuck on one sound.”

Guitar tones are something of a specialty with Voo Davis, who played an assortment of vintage guitars, as well as pedal steel, mandolin, and keyboards, including all the instrumentation on two of the album’s 14 tracks. Joining him on Midnight Mist are Craig Borchers – drums; Michael Burkart – Hammond B3 organ; Reggie Winterland – bass; Calvin Conway – harmonica, fiddle; Carolyn Broussard and Dorian Rush – background vocals.

Coming off the critical success of his last album, Vicious Things, Voo Davis continues to build on the momentum of what has come in the past with a keen eye toward the future. While all three of his albums show differences, the common thread among all of them is Voo’s ability to mix genres of music and blending them into a common thread that flows naturally in each release.

“Midnight Mist isn’t like my previous two albums, but I think it’s a mixture of both with a more mature side,” he states. “The difference between the first two and this one is that on Midnight Mist the song took precedence.”

A nonbeliever in slick computer fixes, Davis uses the one-take approach throughout the new disc, relying on musicianship instead of computers, emotion instead of effects. The result is an album that has a live performance feel to it with an energy level that is palpable.

“We recorded the album in three days, two of which were spent on instrumentation, and on the third day I finished up vocals. It was ten hours in the booth that day and if something didn’t work the first or second time we moved on.”

Born in Anniston, Alabama, Brian “Voo” Davis’ moved with his family to Chicago while still a child. That transition helped embed his Alabama clay roots musical foundation with some Chicago juke joint flash. The resulting sound mix permeates throughout his overdriven acoustic slide guitar playing style. Touring with former Koko Taylor guitarist and Blues Music Award-winner Eddie King, Davis learned to travel the blues circuit and sharpen his craft alongside one of the best. Critics began to take notice, too: Illinois Entertainer hailed Davis’ vocals as “built for the blues;” while iTunes called him “one of those rarities who takes his music to the same ol’ hangouts but finds something new and revelatory in the experience;” and Goldmine Magazine summarized its review by describing his music as a “Hendrix/Buddy Guy/RL Burnside combo of blues-rock chops.”

His 2012 basement-recorded release, A Place for Secrets, spent seven months running through the Americana and Roots Music charts respectively, while surprising the blues/Americana music scene with an overdriven acoustic mix of slide-based guitar songs. While personal tragedy with the untimely passing of his wife in 2009 motivated the young guitarist back to music, the songs Davis has created since that time have been called “lyrically encouraging.”