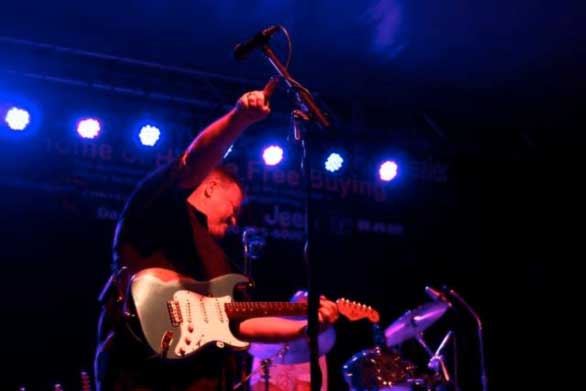 (WALLACE, ID) — Residents of Wallace [Idaho] would say that they knew their blues festival was the best in the region already, but last Thursday, it was officially confirmed by the Inland Empire Blues Society (IEBS) at their 24th Annual Awards Ceremony in Spokane.

Made up of blues enthusiasts across the Pacific Northwest, the nonprofit Blues Society handed out 22 awards on Nov 8 to performers and venues alike for their musical contributions. Many of the award winners performed (or have performed) in Wallace, such as Tiphony Dames, who won Best Female Blues Performer.

As for the honor of best festival — Wallace would end up beating out the Winthrop Rhythm & Blues Festival and the Sunbanks Music festival for the crown.

Put on by the Historic Wallace Arts Council and Too Far North Productions, it seems the 7th edition of the Wallace Blues Festival held in July was the funkiest of them all.

Too Far North producer Craig Heimbigner, who has put on every year of the festival, attributes the unique atmosphere (including the “red cup” rule) to the town receiving the honor.

“It’s a great event,” he said. “People do love coming to Wallace. It’s a beautiful town and a beautiful place. It’s my favorite event and I set up a lot of them.”

Heimbigner is also involved with organizing other blues festivals, so he has a good point of reference when speaking about Wallace.

“It’s not just music in a field. It’s the shopping and the restaurants and the people,” he added. “I think the Wallace experience is superior to the other festivals.”

On top of the uniqueness of the city, Wallace Chamber of Commerce Coordinator Dave Copelan points out that it never hurts to also have an incredible lineup.

“We had a record number of bands and some big names there,” Copelan said. “Nikki Hill was fantastic and blew folks away. Roy Rogers and The Delta Rhythm Kings have played with everyone … all these legends of the blues. Plus, all these regional bands too.”

Combine all this with favorable weather and you have a recipe for an award-winning event.

Hoping to build off the success, Wallace Blues Festival organizers are already getting ready for next year by getting the word out and securing more hotel rooms for the entertainers.

The Inland Empire Blues Society actively seeks out up and coming artists, as well as seasoned performers, to play in our region. They also work to promote concerts at various venues and introduce as many people as they can to the genre.