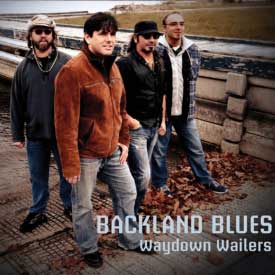 Roots and blues rock quartet, Waydown Wailers, hail from the small town of Canton in upstate New York, the borderland region on the Saint Lawrence River that the locals refer to as the “Backlands,” an area infamous for being settled by independent free-thinking people, and thus a fitting title for the band’s third album Backland Blues. The Wailers deliver their unique twist on the blues, they call “Outlaw Jam,” mixing influences from jam band icons the Grateful Dead and the Allman Brothers with touches of British invasion pop and folksy Americana and Country into a gritty, unpredictable sonic strew.

The eleven tracks on Backland Blues include three inspired covers and eight original songs written by the Parker brothers, David and Christian, who handle the guitar work backed by the stout rhythm section of Connor Pelkey on bass and Michael “Scruffy” Scriminger on drums.

The album opens with good old fashioned twelve bar juke joint jam “Back Door Woman Blues,” with producer, “Professor Louie,” sitting in with the fellas on honky-tonk piano. Christian then rips some scorching B Bender guitar on the intro of the swamp rocker “I Want Your Soul,” with David delivering the raspy lead vocals drawing a comparison to Johnny Winter. Scruffy then lays down a thundering jungle boogie on the toms for a reinvention of the Elmore James’ classic “Done Somebody Wrong.” Parker examines the prat falls of life’s struggles on the jaunty country shuffle “Another Bump In The Road.” The Wailers then dig deep in a funky boogaloo for the Deadhead groover “No Mercy,” before shifting gears to lay down a spot-on version of the 1958 rock ‘n’ roll standard “Dizzy Miss Lizzy,” as made famous by the Fab Four.

The pastoral country stomp “Every Passing Mile” features soaring dual guitar leads and tight vocal harmonies. Parker then contemplates his place in the universe on the folk rocker “Somewhere In The Middle” that ramps up to a swirling jam session. The edgy minor key blues rocker about a desperate man, “I’m On The Hunt,” precedes a remix of “State Of The Union,” the politically-charged title track of their 2013 debut album.

Each of the Waydown Wailers gets a moment to shine on the time-shifting cover of the foreboding tale of a houngan in “Lover Of The Bayou.” The deep cut from the country rock pioneers, The Byrds, is given the full Professor Louie treatment with his tenacious Hammond B3 joining in for the cinematic climax that closes the album with flair and fire.