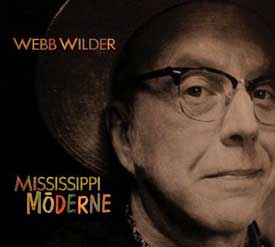 Mississippi Moderne is the all new album from veteran roots rocker, Webb Wilder on Landslide Records. A 2011 inductee into the Mississippi Musicians Hall Of Fame, Wilder has crafted a lively recording that pays homage to his home state through a striking set of originals, coupled with distinctive cover renditions that stretch from tunes by the Kinks to Charlie Rich and Jimmy Reed. Given superb backing from his highly accomplished and longtime bandmates, the Beatnecks (Tom Comet, bass, Bob Williams, guitar, and Jimmy Lester, drums), Mississippi Moderne captures the full flavor of Wilder’s raucous style, based on his singular baritone vocal delivery, solid guitar, a tight, punchy rhythmic foundation and some surprising touches of the heart added in as well.

Tracked at Studio 19 (originally Scotty Moore’s Music City Recorders) in Nashville and produced by Wilder, Tom Comet, Bob Williams and Joe McMahan, Mississippi Moderne represents the first new Webb Wilder album since 2009, and it shows that the man has, without question, furthered his charismatic singing style while maintaining a strong group of musicians who are well-schooled in cranking out Wilder’s unique brand of energized rock and roll music. The package also showcases Wilder’s compelling ability to write catchy melodies and lyrics, either on his own or with notable co-writers Dan Penn, John Hadley and Patrick Sweany.

The Hattiesburg, Mississippi, native first hit nationally in 1986 with the now iconic classic, It Came from Nashville, and ever since he has confounded a slew of fans and critics attempting to define and categorize his style. As 20th Century Guitar Magazine noted, Wilder is “a master at scrambling the sounds, songs and threads of country, blues, British rock, rockabilly, and the freedom and emotion of soul music.” Wilder has always described his sound as simply “a roots band for rock fans and a rock band for roots fans. On Mississippi Moderne, we’ve kept some of our trademark craziness, but there’s also a lot of roots solidity and some balladry to boot.”