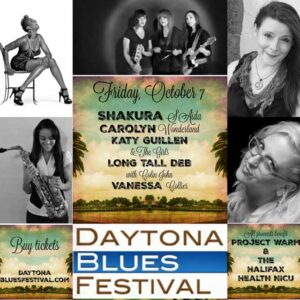 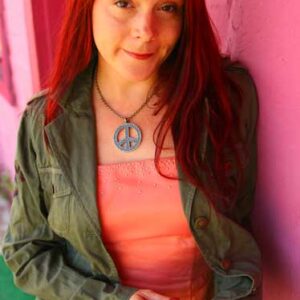 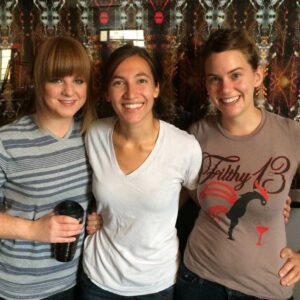 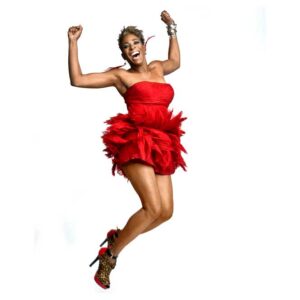 (Daytona Beach, Florida) – The seventh annual Daytona Blues Festival opens Friday, October 7, with a powerhouse line up of all women fronted bands. Starting at 2:30 pm, historic Jackie Robinson Ballpark in beautiful downtown Daytona Beach will come alive with the sounds of some of today’s most talented women playing their unique and exciting versions of the blues. From rising star Vanessa Collier to international sensation Shakura S’Aida, with Carolyn Wonderland channeling some Janis Joplin in between, Friday’s artists personify what it means to be a woman in the blues.

Friday’s headliner, Shakura S’Aida, arrives in Daytona Beach from Brooklyn, New York, via Switzerland and Toronto, Canada. A Florida performance by Shakura is a relative rarity and no wonder. When not touring in the United States or Canada, Shakura has been seen in the Caribbean, Moscow, Dubai, Romania, Switzerland, Australia, Austria, Italy, Germany, France, Macedonia, and organizing a festival in Kigali, the capital of Rwanda. And that’s just in the last two years! No matter where she performs, this multi-lingual artist with the soulful voice and enthusiastic personality instantly connects with her audience.

Opening for Shakura is the reigning queen of Austin Blues, Carolyn Wonderland. Carolyn shines brightest in live performance, winning legions of fans with her take-no-prisoners approach to the stage. Those fortunate enough to see her live bear witness to how she sparks fire on guitar and to the soulful fury in the force of her vocal grit. While on stage, Carolyn will transport Daytona Blues Festival fans to the heart of Texas blues, and that’s not a bad thing.

Friday night also marks the return of Kansas City’s most exciting up-and-coming band, Katy Guillen and The Girls. When last at the Daytona Blues Festival in 2014, KG&G were fresh off their outstanding finalist performance at the IBCs in Memphis. It was their first trip to Florida, and after amazing the crowd with their talents and energy, they couldn’t resist a trip to our world famous beach. Two years later, the band is tighter and more exciting than ever, and they are ready to impress both new and returning fans. And they have more than earned a return visit to our beach!

The diversity of women in blues is highlighted by Long Tall Deb featuring Colin John. Long Tall Deb’s voice has been described as a honey and molasses soaked mix of Koko Taylor’s heart and Etta James’ soul. Colin John’s guitar playing reflects Hendryx through a Hawaiian vibe. Together, they incorporate a world influence into their soul based blues. Their live performances are simultaneously engaging and incendiary and they connect with each other and audiences around the world in a positive, uplifting and inspiring way.

Friday opens with the captivating and multitalented Vanessa Collier. A product of the world-renowned Berklee College of music, Vanessa has taken the blues world by storm. Prior to releasing her first album, she toured with Grammy Award-winning, Blues Hall of Fame artist Joe Louis Walker (who plays the Daytona Blues Festival Saturday, October 8). Vanessa now fronts her own band as vocalist, saxophonist and songwriter, and she is ready to bring her high energy, powerful performance to get the seventh annual Daytona Blues Festival started right.

So buy your tickets and book your rooms for the Daytona Blues Festival, October 7th, 8th and 9th.