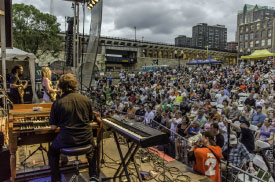 Once again, the Budweiser main stage at 700 N. First Street will host a talented and diverse collection of local acts, national headliners and a Grammy winner, all from the world of Blues, Rock, Soul, Rockabilly and Country.

Headliners this year include the Texas Trio, The Reverend Horton Heat. They electrify audiences worldwide with their incredible stage presence and contagious energy. Their sound is a mix of Surf, Country, Big Band, Punk, Swing and Rockabilly with humorous lyrics. The Reverend Horton Heat will take to the Budweiser main stage on Saturday, August 31 at 9pm. Opening for The Rev. with a 7pm show is Billboard Magazine’s #1 Blues Artist, Canadian (now a St. Louis resident)
guitarist, Anthony Gomes. 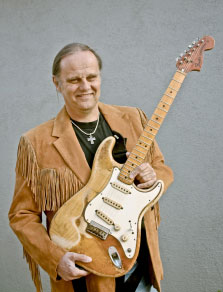 Sunday, September 1, the great Blues guitarist, Walter Trout (pictured here), will perform at 7pm. A former member of John Mayall’s Bluesbreakers, Trout holds the sixth spot on BBC Radio One’s list of the Top 20 guitarists of all time. On June 11th, Trout released, Luther’s Blues, a tribute to the late, great Luther Allison. Trout will serve as the lead-in for Grammy winner, David Clayton-Thomas who will close out the Budweiser main stage with a 9pm show.

Clayton-Thomas, most notably known for being the former front-man of Blood, Sweat and Tears, has released his first full-length blues album, A Blues For The New World, earlier this year. With a 10-piece band, he will perform his own blend of Rhythm & Blues, Reggae, Big Band, Jazz and Be-Bop, all with a funky undercurrent of down-home Blues (as well as some BS&T classics). Big Muddy is one of only 5 concerts Clayton-Thomas is performing in North America before his European tour this year.

For a full listing of the line-up and to purchase tickets to Crown Royal’s Big Muddy Blues Festival, you can visit bigmuddybluesfestival.com. Attendees can also receive festival updates via Twitter by following @BigMuddyBlues or find us on Facebook. Satellite stages are again free to the public. Budweiser main stage limited VIP tickets are $45/day, with general admission lawn seating available for $13/day.