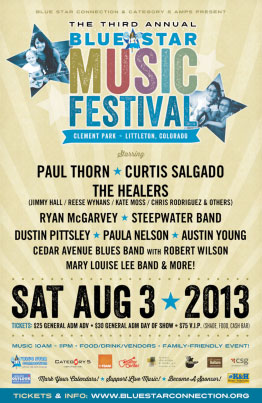 Denver Mayor Michael Hancock has declared August 3, 2013, “Blue Star Connection Day” as the Third Annual Blue Star Music Festival comes to Littleton, CO with its most diverse, impressive lineup yet. The festival, a benefit for Blue Star Connection, will be held on Saturday, August 3rd at beautiful Clement Park in Littleton, from 10am-11pm.

The festival will celebrate Blue Star Connection by bringing to life Blue Star's mission of providing access and ownership of musical instruments to medically fragile children, teens and young adults with cancer and other serious challenges in the name of music therapy. Blue Star Connection is non-profit, 501(c)(3) organization which recognizes the power of music to help kids who are struggling with an illness cope, focus, and even heal. BSC has reached hundreds of kids, and has donated musical gear to the Music Therapy departments in more than 25 children’s’ hospitals across the U.S., as well as to several other community programs.

In addition to these amazing performers, several “Blue Stars” (those who have received instruments from the organization) are taking part. The Colorado Blues Society will be on hand overseeing a massive gear drive, in an effort to collect musical instruments in good working condition to donate to BSC and aid in its efforts.

General admission tickets for the festival (available at the BSC website and at Music Go Round in Littleton) are $25 in advance and $30 the day of the show, with free re-entry once admission is paid. V.I.P. seating is available (under a tent and with access to designated cash bar) for $75. Children under 13 admitted free. Music will run from 10:00 am to 11:00 pm. Gates open at 9:30 am.