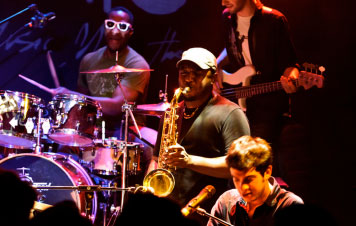 American Music Abroad (AMA), a cultural exchange program that uses music as a means to engage audiences worldwide, has opened the application round for the 2014-15 season. Bands and ensembles are encouraged to apply at americanvoices.org/ama/apply/application. AMA is a partnership between American Voices and the U.S. Department of State’s Bureau of Educational and Cultural Affairs. The deadline for applications is January 6, 2014.

Ensembles from any characteristically American musical genres are welcome to apply, including, but not limited to: Blues, Bluegrass, Cajun, Country, Folk, Latin, Native American, Gospel, Hip Hop/Urban, Indie Rock, Jazz, Punk, R&B and Zydeco. Ensembles will be selected for artistic quality, a strong education and interactive component, and a dedication to cultural engagement.
Previous American Music Abroad ensembles have reached audiences in more than 50 countries who had little or no access to live American music. To learn more about AMA visit amvoices.org/ama/.

American Voices has been conducting cross-cultural engagement with audiences in more than 110 nations worldwide since 1993. Serving as a cultural bridge, American Voices has introduced American music and culture the world over, showcasing a wide variety of genres ranging from jazz to classical symphony to hip hop in counties including Iraq, Afghanistan and Sudan. Meanwhile, our Youth Excellence on Stage (YES) Performance Academies have brought Broadway theatrical education programs to places such as Thailand, Pakistan and Lebanon. American Voices programming provides much-needed expertise and support to aspiring musicians, dancers and actors, as well as enhancing cultural understanding and communications among peoples and nations. For its cultural diplomacy work, the U.S. Center for Citizen Diplomacy (USCCD) selected American Voices as a "Best Practice Organization" in 2010. In October 2011, American Voices was the chosen by the U.S. Department of State to administer the American Music Abroad program. 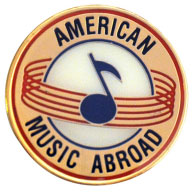 The Bureau of Educational and Cultural Affairs promotes international mutual understanding through a wide range of academic, cultural, private-sector, professional, and sports exchange programs. These international exchanges engage youth, students, educators, artists, athletes, and emerging leaders in many fields in the United States and in more than 160 countries. Alumni of ECA exchanges comprise over one million people around the world, including more than 50 Nobel Laureates and more than 320 current or former heads of state and government.

For more information about the AMA audition process, see the following contact information: