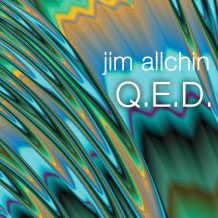 The evolution of the extraordinary singer, songwriter and guitarist Jim Allchin has been an unlikely combination of events. Born dirt poor in the middle of an orange grove in central Florida, he picked produce, drove tractor and began playing guitar as a youngster. He gigged throughout the South before going to college, resulting in a Ph.D. in Computer Science and a job with Microsoft in 1990.

The gentle minor key instrumental “Thinking of You” plumbs layers of meaning often not found in the best lyric. The swinging shuffle of “Trash” has a startling, angry burst of notes. The snappy shuffle “Runnin’ Away” begins with a down home, acoustic, unaccompanied, country boogie blues intro. His take on the classic blues plaint against a conniving female in the hot swinging shuffle, “Tried and True,” has Allchin burning the strings off his axe.

The instrumental slow blues “Drownin’” is the spectacular epicenter of an album containing a multitude of high points. The funky, jazzy minor key blues “Evil Hearted Woman” paints a dark portrait of a black magic femme fatale. On “Come on Home” Allchin journeys from Mississippi to Louisiana with a swaying, laconic 8-bar boogie shuffle that builds to a classic R&B progression while he employs his velvety tenor voice and the New York Brass make like a Dixieland band. Bringing the curtain down, Allchin treats the listener to a dramatic Latin-rock instrumental boasting flamenco flourishes as the new guitar hero utilizes a colorful palette of techniques and tones to create a world of sounds and imaginary sights.

Q.E.D. is the abbreviation for the Latin “Quod erat demonstradtum” translated as “What had to be proved” or “What was to be demonstrated” that is sometimes used to end a mathematical proof. Both definitions describe in a graceful, elegant way how Jim Allchin has undertaken to produce his precisely created music. However, he needs to provide no further “proof” than his undeniable “theory of relativity” of outsize talent plus a broad artistic sensibility equals deeply expressive and emotional music that will stand the test of time.