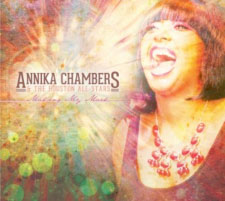 Montrose Records announces the signing of Houston-based blues/soul singer Annika Chambers and release of her debut album, Making My Mark. On the new CD, Annika (pronounced “Ann-NEE-Ka”), is backed by an aggregation dubbed “The Houston All-Stars,” well-named because it boasts the talents of many Grammy winners and nominees. Heading that list is bassist Larry Fulcher, who co-produced Making My Mark along with Montrose Records owner/engineer Richard Cagle. Fulcher is a two-time Grammy winner for his work with Taj Mahal on the albums “Shoutin’ in Key” and “Senor Blues,” and has appeared on 10 of Taj’s albums. He’s also a regular member of the acclaimed Phantom Blues Band and has  recorded and/or toured with such other renowned performers as Eric Clapton, Bonnie Raitt, Maria Muldaur, Willie Nelson, Ruthie Foster, Curtis Salgado, The Crusaders, Smokey Robinson and The Wailers.

The even-dozen tracks on Annika’s new CD feature several originals by Chambers and additional songs penned by Larry Fulcher’s talented daughter Dominque, who also contributes vocals on the album. A diverse set of covers enhanced by Annika’s unique takes on them include songs from Bobby Charles (“Jealous Kind”), Spirit bassist Al Staehely (“Trust Me”), Joe Sample/Alan Gorrie (“Put It Where You Want It”), Steve Cropper/Eddie Floyd (“Love’s Sweat Sensation”) and B.B. King (“Let’s Get Down to Business”)
At the core of this great supporting cast are the bluesy, funky and powerful vocals of Annika Chambers, an extremely gifted singer with the drive and talent that stamps her as a rising star in the blues and soul world.
After an eight-year stint in the U.S. Army, which saw her rise to the rank of Sergeant and serve two deployments in Iraq and Kosovo, Chambers left the military to pursue her dream of being a singer. “This record is from my heart and soul,” said Annika about the new album, “and I will cherish it for years to come. Larry and Rich took my vision and enhanced it into something that I would have never imagined. I’ve always told people it’s one thing to believe in yourself but it’s an even greater feeling when you have others believing in you. Thank you for believing in me.”

With the release of Making My Mark, Annika Chambers stands as a shining example to others to follow their dreams and not settle for anything less.

Making My Mark is available through CDBaby at iTunes and Amazon, as well as at the label’s website.
For more information, visit www.annikachambers.com and www.montroserecords.com.