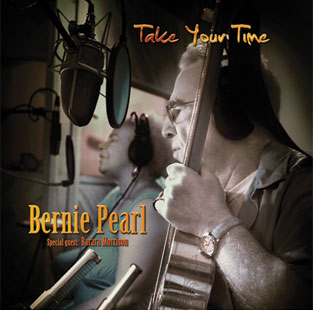 You’ll find traditions and departures on Take Your Time, the new CD by Bernie Pearl. This CD represents the life-long commitment of Los Angeles-born, Long Beach-based guitarist Bernie Pearl to the traditions of the blues guitar. His playing prompted one critic to comment, "Bernie's the best we have and probably the best pure blues guy period." But Take Your Time also represents some departures. One of them is Bernie’s inclusion of Jazz-Blues diva, Barbara Morrison on three vocal duets.

The two met while working on an all African-American casting of Federico Garcia Lorca’s Yerma in 1981. They soon discovered their mutual friendship with sax legend Eddie “Cleanhead” Vinson and had spoken often since about recording together. They took their time and the right time came. They dedicate this collaboration to Mr. Vinson.

Bernie has had the opportunity to met and perform with numerous, legendary, country-blues artists. One was Mississippi Fred McDowell, who would sometimes mentor with a gentle reminder, “Take your time, buddy.” The advice stuck.

Three of the tunes on this CD were recently learned to accompany a scholarly dissertation on the Book of Lamentations by Professor Daniel Smith-Christopher, The Bible and the Blues.

Bernie was inspired to add two electric lap steel pieces to this CD -- a first on his CDs.

Take Your Time (BEBCD 009) is available for purchase on CD Baby.com

“Worried Life Blues” -  Based on Fred McDowell’s “Done Tol’ Everybody”, derived from Big Maceo’s original. A duet with Barbara.
“Katie Mae” - A Lightnin’ Hopkins love song. Open a bottle of wine, and take your time with someone you love. Barbara adds something delicious
“Kickstart”  - An original instrumental adapted to work with drums and to provoke happy feet. Recognizing our Kickstarter.com angels.
“Rock Me Mama” - Big Boy Crudup’s 1944 classic helped usher in the era of electric guitar blues. We do what we can to evoke the era, and I had just the guitar for it.
“Mama Don’t Dog Me”  - Mance Lipscomb’s irreverent song came to mind while leading a jam class. No wonder he got put out of church.
“Jesus on the Main Line” - We rock the religious perennial. Learned from Fred and Annie Mae McDowell, we sing a duet.
“Mississippi Raga” - I never heard Fred McDowell, or anyone else, play like he does on his wordless prayer, “Como.” My improvisation differs in several ways, but not in intention.
“One Room Country Shack” - Mercy Dee Walton. One of three tunes on this CD learned for the musical portion of The Bible and the Blues.
“Sloppy Drunk” - My re-arrangement of Big Joe Williams’ stomp-down take on the Sonny Boy Williamson I classic. Picked on a National steel.
“Tough Times” - John Brim. The second of three from the “Bible and the Blues.” Barbara and I duet with the full band. I play lap steel, Bobby blows up a storm.
“10:00 am Blues” - So named because our first recording session began at 10:00 am and we warmed up with this guitar/bass improvisation.
“Traveling Riverside Blues” - The peerless Robert Johnson has been covered like a blanket, but I was always fascinated by the brilliant riffing on this tune.
“Third Degree”  Eddie Boyd’s lamentation, also learned for The Bible and the Blues. Listening to the Sacred Steel tradition made me dust off my lap steel for this CD.
“This Old Fool” - A song I wrote a while ago. We added bass and drums to help an old fool tell his story.

Take Your Time (BEBCD 009) is available for purchase on CD Baby.com
Find more info at www.berniepearl.com