Bryan Lee :: Play One For Me 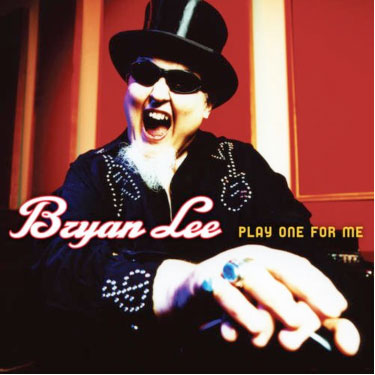 Play One for Me is the label debut CD from New Orleans-based blues guitarist/singer Bryan Lee, recorded at Severn Record’s new state-of-the-art studios in Annapolis.

Produced by Kevin Anker, David Earl and Steve Gomes, Play One for Me features Bryan Lee’s powerfully soulful vocals and stinging guitar backed by the label’s studio house band of Anker on keyboards, Gomes on bass and Robb Stupka on drums, augmented by special guests Kim Wilson (harmonica) and Johnny Moeller (rhythm guitar) of The Fabulous Thunderbirds. Horns and strings on the new album were arranged and conducted by Willie Henderson.

The new disc’s 10 tracks are a solid mix of five Bryan Lee originals and covers of such songs as Bobby Womack’s “When Love Begins (Friendship Ends),” Howlin Wolf’s “Evil” (with a guest harmonica performance by Kim Wilson), Freddie King’s “It’s Too Bad (Things Are Going So Tough),” Dennis Geyer’s “Straight to Your Heart” and a beautiful rendition of the George Jackson classic, “Aretha (Sing One for Me).”

Although raised in a small Wisconsin town near the shores of Lake Michigan, Bryan Lee has been a New Orleans resident since 1982, so much so that he’s been called a “New Orleans Blues Institution;” and is also known as the “Braille Blues Daddy,” dubbed so because he’s been blind since the age of eight. Eric Clapton called Bryan Lee “one of the best bluesmen I have ever heard.” He's played the prestigious New Orleans Jazz and Heritage Festival for over 25 years and his new Severn CD marks his debut for an American label, with previous albums appearing on the Canadian imprint, Justin Time.

Bryan Lee’s recognition in the Crescent City began in 1982 with a long residency at the Old Absinthe House in the French Quarter. One of the formative blues guitarists who caught his act was a young Kenny Wayne Shepherd, whose time sitting in with Lee’s band proved to be a revelatory experience for him. Many years later, Shepherd would return the favor by including Lee in his documentary, 10 Days Out: Blues from the Backroads, which was nominated for two Grammy Awards and won the 2008 Blues Music Award for Best DVD and the 2008 Keeping the Blues Alive Award under the category of Film, Television or Video. A follow-up album, Live in Chicago by Kenny Wayne Shepherd and Friends, was nominated for a Grammy in 2010 and won the Blues Music Award for Best Blues/Rock CD in 2011. Bryan received a Grammy nomination and also received a BMA for his contribution to this CD.

Lee, whose New Orleans studio became a victim of Hurricane Katrina’s wrath, was nominated for a Blues Music Award in 2008 for his Katrina Was Her Name CD, which also won the German Critics award that same year.

Severn Records is distributed in the U.S. by City Hall Records.