Hop Over the Pacific for the Bluesfest – Easter 2014 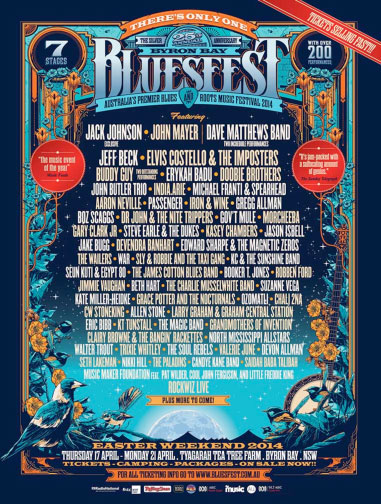 What were your new year’s resolutions this year? Travel more? See live music? Meet new people? Down Under Answers has the solution to mark them all off right now!

Australia’s premier blues and roots festival is gearing up to celebrate its 25th birthday and all the stops have been pulled out to throw a spectacular five-day party that you will never forget! With an incredibly lineup featuring some of the world’s biggest names in blues, roots, soul, gospel, R&B and rock giving more than 200 amazing performances across seven stages, do not miss this chance to experience the 25th anniversary Bluesfest.

Taking place in beautiful Byron Bay from April 17 – 21, time is fast running out to get your name off the invite list and onto the RSVP list with great Bluesfest vacation packages from Down Under Answers. Limited packages are still available featuring roundtrip air to Australia, five-day Bluesfest ticket, accommodation, transfers and survival pack starting from just $2999. The only decision you really have to make is where you want to sleep.

Want to stay on site at the festival? We have Rainbow Tipis, Tent Motels and stylish campervans on offer. Or if camping is not your thing, there are oceanfront hotel options too. Visit http://www.duatravel.com/bluesfest2014 for more information and pricing.

All packages are customizable if you want to include a visit to another part of Australia, a South Pacific Island, or if you want to follow your favorite band around Australia after the festival. Call Down Under Answers on 1-800-889-1464 and get your musical escape booked today!

If camping is not the thing for you but you would like to stay in the area then please check out Byron Bay Accommodations on www.duatravel.com/bluesfest2014