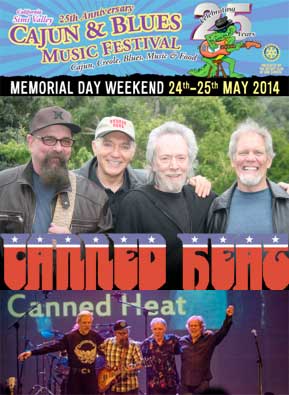 Canned Heat’s unique blend of modern electric blues, rock and boogie has earned them a loyal following and influenced many aspiring guitarists and bands during the past four decades. Their Top-40 country-blues-rock songs, “On The Road Again,” “Let’s Work Together,” and “Going Up The Country,” became rock anthems throughout the world with the latter being adopted as the unofficial theme song for the film Woodstock. Their cover version of Wilbert Harrison’s “Let’s Work Together” was actually their biggest hit as it rose to #1 in 31 different countries around the world.

The 25th Annual Simi Valley Cajun & Blues Music Festival will be held on Saturday and Sunday of Memorial Day weekend, May 24th & 25th, 2014. 2014 promises to continue our tradition of bringing fans a full weekend of nonstop award-winning entertainment,
more food choices than you can sample in two days, and activities to keep kids of all ages entertained too.

The Blues Stage will feature some of the most talented and renowned Blues & Roots acts in the world both Saturday and Sunday.

Both stages feature lots of viewing space plus large dance floors. In addition, this family friendly event has a giant kids area featuring bouncers, rock walls, specialty acts, crafts and talent shows.  There are also food booths and many crafts and merchandise booths.