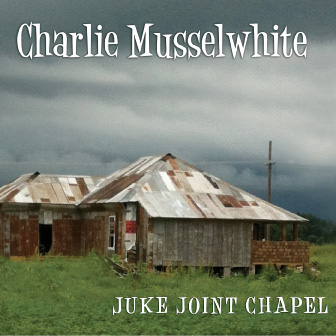 The live and kicking Juke Joint Chapel, Charlie Musselwhite’s latest gem,showcases five originals and seven choice covers with a stone groove band of Matt Stubbs (guitar), Mike Phillips (bass) and June Core (drums). “The blues sounded like how I felt growing up. Too many people think of the blues as sad, but I think many of these tunes will immediately dispel that notion, as they are fun, dancing tunes that lift your spirits. I often tell people that the blues is your buddy in good times and your comforter in bad times. It empowers you to keep going,” states bluesman extraordinaire Charlie Musselwhite. “It is secular spiritual music, the gospel blues. It’s music from the heart instead of the head.”

His journey through the blues was literal from his birth in Mississippi to Memphis, Chicago and California. Arriving in Chicago in the early sixties, he was just in time for the epochal blues revival. In 1966 at the age of 22 he recorded the landmark Stand Back! Here Comes Charlie Musselwhite’s Southside Band to rave reviews. A precipitous relocation to San Francisco in 1967, where his album was being played on underground radio, found him welcomed into the counterculture scene around the Fillmore West as an authentic purveyor of the real deal blues. More than 20 albums later he is at the top of his game, a revered elder statesman of the blues nowhere near ready to hang up his harp belt, his depth of expression as a singer and an instrumentalist unexcelled and only getting deeper.

On Juke Joint Chapel, the classic Eddie Taylor shuffle “Bad Boy” chugs with grace and attitude as Musselwhite slyly quotes “C.C. Rider” in his opening harp solo, his tone as thick as sweet molasses. His is one of the most recognizable voices in the blues, a true “instrument” he employs effortlessly to great expressiveness. “Roll Your Moneymaker” cruises smoothly as a ’55 Lincoln Continental, the luxury ride only interrupted by dynamic stop-time. Written by crap-shooting Shaky Jake Harris, whom Musselwhite says played harmonica as “another hustle” and modestly admits to “showing him a couple of licks.” Stubbs stands out and is a monster guitarist graciously allotted extensive solo space throughout from a leader who has enjoyed the services of many greats, but will never feel threatened by another instrumentalist. The toe tapping two-beat of Tony Joe White’s “As the Crow Flies” is driven hard by the propulsive and endlessly inventive Stubbs along with Musselwhite, who has observed, “In country music, the singer might say ‘my baby left me and I’m gonna jump off a bridge.’ But in blues, they say ‘my baby left me, and I’m gonna get a new baby’.” “Gone Too Long,” from fellow harmonicist Billy Boy Arnold contains one of his patented syncopated figures and an unstoppable rhythm from the Musselwhite band demanding you can’t sit down.


This Musselwhite set has a Little Walter nugget called “It Ain’t Right,” which almost levitates with buoyant energy. He exuberantly tests the metallurgy of his “Mississippi saxophone” while utilizing his natural blues growl to lecture his baby as Stubbs throws down the gauntlet to other blues guitar heroes. About the original “Strange Land,” Musselwhite states “I went to Chicago when I was 18 and coming from the South, I felt like a stranger in a strange land, not having any idea there was a book with that title.” The menacing, heavy country blues vamp surges below while the harper and picker take the track to an otherworldly place. The autobiographical, thumping shuffle “Blues Overtook Me” finds Musselwhite confessing “The blues overtook me, when I was a little child. You know fast women and whisky, made this poor boy wild…I ain’t complaining!” as his slippery harmonica dramatically ranges from lyrical high notes to a snarly low rumble in an abstract evocation of his life. The exultant boogie of “River Hip Mama” pays homage to his close friend John Lee Hooker, the modern classic being covered numerous times. Saucy lyrics such as “She’s long and tall, she weeps like a willow tree...she caught me in the woods and weeped all over me,” compel the author to comment with amusement how often others get them wrong.

The snappy “Blues Why Do You Worry Me?” lopes with a lilt as Musselwhite’s poetic lyrics confirm his credo with “I learned to smile at trouble, I won’t let it get me down (2x). I’ll keep on keepin’ on 'till the last deal goes down.” A surprising figurative trip to South America produces the irresistible syncopation of “Feel It in Your Heart,” described as “It’s what they call ‘forro’ music in Brazil and is a corruption of the English ‘for all’, because it is the music for everybody. It’s kind of like the blues of Brazil. The blues and the music of Brazil and Cuba are cousins of each other because that’s where European and African music came together and sparked a new music in a new place.” The obscure Prince Conley minor key samba “I’m Going Home” is slick as satin with a booty-shaking beat kept popping by the perpetually locked-in rhythm section of Phillips and Core. Appropriately closing the festivities is the Duke Pearson minor key ballad “Cristo Redentor,” translated as “Christ the Redeemer,” originally inspired by the monumental statue of Jesus overlooking the Rio de Janeiro harbor, and Musselwhite’s signature performance. His audience always clamors to hear it and the enormously moving instrumental affords the harp-meister the opportunity to let flow his bottomless wellspring of soulful expression, combining the emotion of the blues with touching melodies.

Charlie Musselwhite, more than any other harmonica player of his generation, can rightfully lay claim to inheriting the mantle of many of the great harp players that came before him with music as dark as Mississippi mud or as uplifting as the blue skies of California. In an era when the term legendary gets applied to auto-tuned pop stars, this singular blues harp player, singer, songwriter and guitarist has earned and deserves to be honored as a true master of American classic vernacular music.