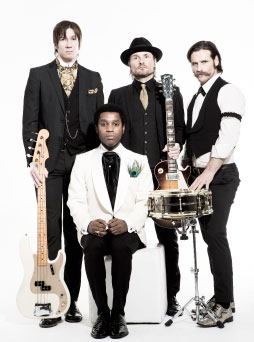 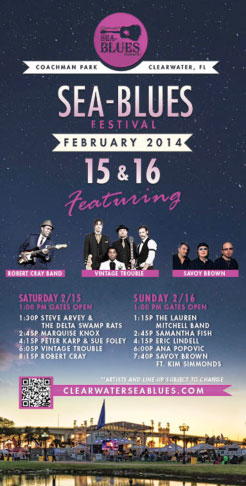 The City of Clearwater, Florida announces the 8th annual Clearwater Sea-Blues Festival and the artists scheduled for February 15 to 16, 2014 at Coachman Park. Having previously served up a number of acts on the brink of stardom, this year Clearwater displays its knack for exciting entertainment by choosing up-and-coming retro rock/blues band Vintage Trouble, currently featured in the national Honda commercial. Sharing the headlining slot is the five-time Grammy Award winning Robert Cray Band. Clearwater will bring together crowds of both young and old with a diligent selection of talent.

Since releasing their first album The Bomb Shelter Sessions in 2011, Vintage Trouble has been gaining worldwide acclaim. They have appeared on the Late Show with David Letterman, The Tonight Show with Jay Leno, Conan and Jimmy Kimmel Live. The band has opened for Bon Jovi, The Who, The Rolling Stones and Dave Matthews. Yahoo Music describes the band’s sound: “Imagine James Brown singing lead for Led Zeppelin and you’ll get an idea of Vintage Trouble’s muscular, in-the-pocket sound.”

The five-time Grammy Award winning Robert Cray Band brings a self-described rock, soul, jazz, blues, gospel-inspired sound to the festival. The band is currently touring its newest album, Nothing But Love. Robert Cray is in the process of writing songs for the band’s next album, which will have an even stronger political edge than previous releases. 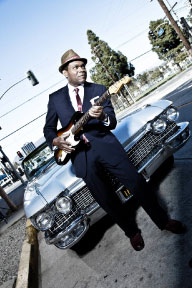 In addition to great blues-inspired music, the festival will offer some of Tampa Bay’s finest seafood cuisine. This year the festival will feature a brand new Florida Brewers Craft Beer Garden. A full list of participating seafood restaurants and vendors are available on the Clearwater Sea-Blues website.

Admission to the event is free and for those interested in a more VIP experience, reserved seating and limited VIP packages are now available for purchase at www.ClearwaterSeaBlues.com. For sponsorship information call Kris Koch at (727) 562 4805. The official Facebook page for the event is www.facebook.com/clearwaterseablues.

About Clearwater
Clearwater is an ideal destination for travelers of all ages and interests occupying prime real estate along Florida’s stunning Gulf Coast. As a top, year round location for both leisure and business, Clearwater boasts an endless supply of sun, warm weather, great dining, along with extensive outdoor activities both on land and at sea. Clearwater Beach is consistently ranked among America’s most beautiful and the city is also home to a wide variety of sporting and music events, including Philadelphia Phillies Spring Training and the annual Clearwater Jazz Holiday. www.visitclearwaterflorida.com