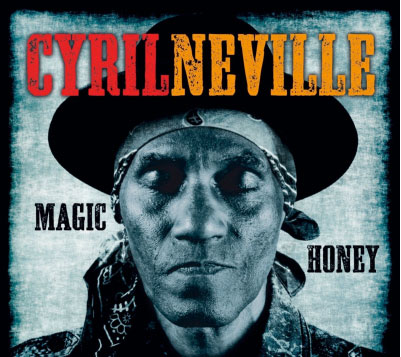 Magic Honey is the first solo outing for Ruf Records from Grammy-winning singer/percussionist Cyril Neville. On the new CD, Cyril steps outside his Royal Southern Brotherhood membership to create a dazzling roots musical gumbo that stirs the pot with many flavors. Produced by David Z (Prince, Etta James, Buddy Guy) and recorded at Studio in the Country in Bogalusa, Louisiana, Magic Honey delivers an amazing amalgam of sounds, all tethered to Cyril’s most-soulful of vocals, and backed by an all-star band that includes Cranston Clements – guitar; “Mean” Willie Green – drums; Carl Dufrene – bass; and Norman Caesar – keyboards. And if that’s not enough, joining in on the fun as special guests are two roots music icons - Allen Toussaint and Dr. John – on piano and organ respectively, plus fellow Royal Southern Brotherhood bandmate Mike Zito and Walter Trout on guitars.

Cyril also makes the recording a true family affair with the addition of his wife, Gaynielle, and son, Omari, providing a special dash of spice on backup vocals. There’s also a sprinkle of celebrity stardust, with New Orleans veteran Allen Toussaint handling the keys on the cuckolded shuffle of “Another Man,” Dr. John on organ for “Swamp Funk,” ex-Bluesbreakers axeman Walter Trout boiling up “Running Water” and Mike Zito lending muscular riffing to “Money and Oil” and “Working Man.”
“Making this record was a spiritual, musical event,” says Neville about the sessions. “The musicians and I approached it like it was an important gig we were playing. All the tracks are first takes. The atmosphere was just that electric. All the way live! I waited a long time to work with David Z and I feel the wait was well worth it. I love how the record turned out. I was blessed with the best rhythm section for the occasion in ‘Mean’ Willie Green, Cranston Clements, Carl Dufrene and Norman Caesar. And blessed again with the presence of two of my mentors and heroes: Allen Toussaint and Dr. John. I'm extremely proud of this record. It's a tasteful, well-cooked musical gumbo that I think will be pleasing to the musical palates of most music lovers.”

As in any great gumbo – musical or otherwise – Cyril Neville blends many ingredients to create a signature sonic dish that draws from a wellspring of blues, soul, funk, rock and world music, adds some heat to the mix and stirs it up to a beautiful boil. The even-dozen tracks on Magic Honey
showcase an incredibly talented songwriter bringing his words to life with a mystical, spiritual honesty and simplicity that transcends any musical categories.

Cyril might have one foot planted in the traditions of the blues, such as the raw emotion on “Something’s Got a Hold of Me” or the slow-burning “Blues Is the Truth,” but the other is striding out and kicking the rulebook aside. There’s the spring-heeled, funk-flavored strut of “Running Water,” the snare-cracking groove of “Invisible” and the stinging title track (“My baby is a queen bee… magic honey dripping from her hive”). Then there’s the amped-up socio-political sideswipe of “Money and Oil” (“Don’t matter how you feel, it’s all sell, sell, sell”) and the album’s most overt rocker, “Working Man” (“Got no time for living, ’cause I’m working all the time…”). By the time you reach the silver-tongued reggae of “Slow Motion” and the irresistible dance floor-filler that is “Swamp Funk,” you’ll be reminded that Cyril is a songwriter who combines a clear artistic vision with a wandering eye.
Magic Honey indeed.