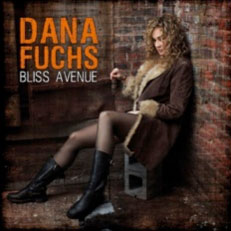 All of the songs on the new album were co-written by Dana and Jon and continue to explore areas that are very personal to her, yet universal in their appeal and substance. “If there’s one line that sounds thrown away or dialed in, it has to be redone,” says Dana. “Every word needs to express the emotion of the song or no one will get it and that leaves me cold.”

The resulting album is a window into the singer’s world view, drawing on everything from the tragic loss of her beloved brother to the loneliness of life on the road. “I’m excited for people, especially those fans who have stuck so close with me, to hear Bliss Avenue,” adds Dana, “because I really purged my soul in a starker, more naked way, both lyrically and musically.

“I got so emotional to the point of tears,” she admits, “singing several of these tunes that are so close to home, like ‘So Hard to Move,’ ‘Bliss Avenue,’ ‘Long, Long Game’ and ‘Vagabond Wind.’ I want this album to reach people in a way that’s meant to be inclusive. Not like, ‘Here’s my world and my story,’ but rather, ‘Here’s my story, can you relate…?’”

Locking in with Dana and Jon’s self-production, this musical dream team flew across tracks that take in flavors including soul, roots, blues and southern rock. “I realized that you have to hire the best musicians to help you reach your vision,” she notes. “It’s such a collaborative effort.”

Dana Fuchs’ musical odyssey began in rural Florida as the youngest of six children raised in a family home that was filled with music. By age 12, she had joined the First Baptist Gospel Choir in a small black church on the outskirts of town; and later when singing in local bands didn’t satisfy her urge to perform, she bravely moved to New York City at the tender age of age of 19 to seek a loftier goal. Scrapping for survival on Manhattan’s Lower East Side and devastated by her older sister’s suicide, she plunged herself into the city’s blues-jam circuit like a freight train.

It was at one of these jam nights that Dana first met Jon Diamond: an established NYC axman who had already toured with the chart-topping Joan Osborne. They promptly formed the Dana Fuchs Band and quickly built a buzz in the Big Apple’s blues clubs, more than holding their own on bills featuring such well-established artists as John Popper, James Cotton and Taj Mahal.

The musical partnership really took off, however, two years later when Dana and Jon began writing together. Armed with a solid body of original material, they drew packed houses at all the top venues in New York City, while sharing bills with such national acts as Little Feat, Marianne Faithfull and Etta James. That has since morphed into nonstop touring across the globe for the past three years playing featured slots at some of the biggest, most prestigious festivals in the U.S. and Europe, while still playing to sold out crowds back home in spots such as The Highline Ballroom.

Word of Dana’s talent spread to off-Broadway, and when she was invited to audition by the producers of the hit Janis Joplin musical Love, Janis, a few bars of “Piece of My Heart,” plus her industrial-strength charisma, confirmed they had their lead. Playing Joplin four nights a week proved an effective shop-window, catching the eye of renowned director, Julie Taymor, and leading to a subsequent turn as “Sadie” in Sony’s highly acclaimed Beatles movie, Across the Universe. With her vocals featured prominently on the platinum-selling soundtrack, this was a project that saw Dana Fuchs Band shows bolstered by a whole new audience, who duly left to spread the word leading to notable guest spots for Dana with Gov’t Mule, Ray Davies and Bob Weir.

Dana released her debut CD, Lonely for a Lifetime, in 2003, and her initial Ruf album, Love To Beg, further upped the ante for her emergence as a true artist on the rise. UK’s Blues Matters crowned her “One of the Top Vocalists of 2011; and R2 magazine said that she has “talent simmering towards detonation.”

On Bliss Avenue, Dana Fuchs shoots for the stars, runs with fans’ expectations and channels the blues while simultaneously defying them. “While the album’s content may seem dark,” explains Dana, “I’m not in a dark place at all, but rather a very hopeful place for music, spirituality and mankind. It often takes looking into the dark soul to see the light…”

Dana Fuchs will support the release of Bliss Avenue with extensive touring both in the U.S. and overseas. For more information, visit www.danafuchs.com.