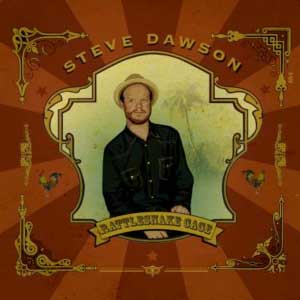 Black Hen Music Presents...Steve Dawson's brand new album Rattlesnake Cage. Sometimes it’s best to just put up a microphone in a room, sit down and play your guitar... This is the record that Steve Dawson’s growing number of fans have been waiting for.

Rattlesnake Cage finally gives them the opportunity to hear Steve interact with his guitar in a way that has never been captured on record before. Until now, hearing the sweet melodies and deep soul of Steve playing solo guitar has been a treat reserved for live audiences in intimate settings. These new simple and unadorned recordings hearken back to the American Primitive sound that John Fahey and other artists such as Peter Lang and Leo Kottke recorded on Fahey’s iconic Takoma record label in the sixties – instrumental music informed by the deep traditions of blues, ragtime, jazz and even Hawaiian music, but taking those influences in unexpected directions. The opening track, “Blind Thomas at the Crime Scene” which takes its title from Fahey’s earliest nom de plume is the recording that most clearly communicates Dawson’s respect for the American Primitive aesthetic, and gives the listener the clearest indication of what’s to come.

Recorded with a single vintage tube microphone that had recently been rescued from decades of hanging from the ceiling rafters of an old theatre in Detroit, you can hear every detail and nuance of each note. The effect of hearing a recording this open and pure is quite astounding.

After countless successes in the industry both as a performer and producer in his native Canada (including 7 Juno Awards as an artist and producer), Steve has relocated to Nashville, Tennessee to begin a new chapter in his career. ‘Rattlesnake Cage’ reflects all of the places Dawson has been and everything he’s heard, resulting in some of the loveliest melodies of his career as a recording artist. As much as these songs can be unobtrusive and listened to in the background at low volume, if a solo instrument is going to hold its own like this in the spotlight, the music being played on it has to have very good bones, and be able to stand up to some pretty intense scrutiny. For all their simplicity and deceptive moments of tranquility, the closer you listen to songs like “Lighthouse Avenue”  or “The Flagpole Skater Laughs From Above,” the sooner you’ll realize that this is music with fire in its belly. Fans of Reverend Gary Davis will recognize the musical references in “The Altar At Center Rave”’ that evokes an imaginary scene at the pulpit where he preached. In the same way, “The Medicine Show Comes To Avalon” bounces along a razor’s edge between antique and future sounds with its heartfelt homage to the music of Mississippi John Hurt.

Yet, for all of the influences Dawson tips his hat to, the sound that emerges on these recordings reflects a confluence of a lifetime’s listening to and collecting vintage songs that fuse with Dawson’s contemporary sensibilities and mastery of modern recording techniques.

In the same way you can recognize that it’s Bert Jansch, Ry Cooder, or Mississippi John Hurt playing guitar after hearing just a few notes, Steve Dawson has established a voice for his instrument that is as distinct as any of theirs to become one of the most identifiable sounds in modern roots music. The 11 songs on Rattlesnake Cage represent our first chance on record to hear Dawson explore the infinite possibilities offered by his pallet of acoustic guitars – both 6 and 12-string acoustics, a National Tricone guitar, and a Weissenborn Hawaiian guitar - without any effects, or even a human voice to separate him from his audience. It’s rare to experience such direct communication in any kind of music these days, but the songs on the record remind us that the sound of a single instrument creating patterns out of the silence is as old as music itself.

The fluidity of Steve’s playing makes what he does sound so effortless that it’s easy to forget that it takes years of disciplined practice to achieve such an apparent simplicity. There are lots of guitar virtuosos out there who can reel off a dizzying array of notes at lightning speed, and Dawson can certainly do that, but at a certain point, great players like him realize that sometimes less is more. Nothing on this record is superfluous. This is music that doesn’t show off or needlessly strut its stuff. Like a perfectly aged single malt, these compositions come to us fully seasoned and mature.