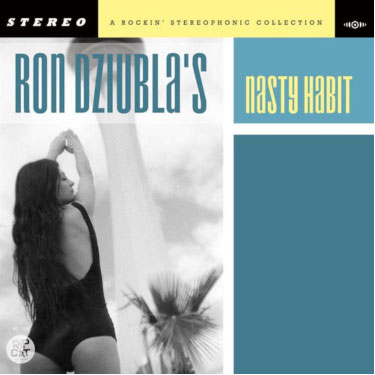 Tenor and baritone sax player Ron Dziubla, known for his work with legendary rock guitarist Duane Eddy, liberally deploys his formidable lung power and creative juices on the 11 songs of his third and most exciting album, Nasty Habit.

Using the wild language of early rock ’n’ roll sax to serve his own needs, he deploys new instrumental music and refurbished classic material in the image of a rabid, bigger-than-life sax honker and screamer.

Nasty Habit is produced by Pete Curry of Los Straitjackets and features Curry on drums as well as a guest appearance by James Intveld.

The titles of his original tunes on Nasty Habit: “Slapped,” “Shaken and Stirred,” “Moan.” “Bordello,” are tip-offs the the musical atmosphere he sets with his attentive support team. Ron varies is tone from track to track keeping a numbing in-your-face sameness from affecting the listening public.

Two cover songs include Jimmy Forrest’s “Night Train,” and r&b standard based on a Duke Ellington composition that gets injected with dizzying new life. So does the well-traveled “Harlem Nocturne.” He shows improvisatory ideas that reflect deep concentration and his invigorated use of form. Dramatic devices like rills, staccato and flutter-tonguing technique and overtone fingerings are employed like a master.